Final Message of the Synod on New Evangelization 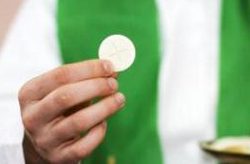 An English-language summary of the text, issued by the Synod, is given below.

“At the beginning of the document, the bishops recalled the evangelical passage from John which tells about the encounter of Jesus with the Samaritan woman at the well: this is the image of contemporary man with an empty vessel, who is thirsting and is nostalgic for God, and to whom the Church must turn to make the Lord present to him. And just like the Samaritan woman, who encounters Jesus, he can but become a witness of the proclamation of salvation and hope of the Gospel.

“Looking specifically at the context of new evangelization, the Synod therefore reminds of the necessity to revive faith, which risks being made obscure in the context of today’s cultures, also faced with the weakening of the faith by many baptized persons. The encounter with the Lord, which reveals God as love, can only come about in the Church, as the form of receptive community and experience of communion; from this, then, Christians become its witnesses also in other places. However, the Church reasserts that to evangelize one must be evangelized first of all, and sends out a plea – starting with herself – for conversion, because the weaknesses of Jesus’ disciples weigh upon the credibility of the mission. Conscious of the fact that the Lord is the guide of history, and therefore that evil will not have the last word, the bishops invite Christians to overcome fear with faith and to look at the world with serene courage because, while full of contradictions and challenges, this is still the world God loves. Therefore no pessimism: globalization, secularization and the new scenarios of society, migration, even with the difficulties and suffering they entail, must be seen as opportunities for evangelization, Because this is not a question of finding new strategies as if the Gospel was to be spread like a market product, but rediscovering the ways in which individuals come close to Jesus.

“The Message looks at the family as the natural place for evangelization and reasserts that it should be supported by the Church, by politics and by society. Within the family, the special role of women is underlined and there is a reminder about the painful situation of divorced and remarried persons: while reconfirming the discipline which regards access to the Sacraments, it is reasserted that they are in no way abandoned by the Lord, and that the Church is the welcoming house for all. The Message also mentions consecrated life, witness of the ultra-earthly sense of human existence, and parishes as centers for evangelization; it recalls the importance of permanent formation for priests and religious men and women and invites the laity (movements and new ecclesial realities) to evangelize, remaining in communion with the Church. New evangelization finds welcome cooperation with other Churches and ecclesial communities, they too moved by the same spirit of proclamation of the Gospel. Special attention is focused on young persons in a perspective of listening and dialogue, to redeem and not mortify their enthusiasm.

“The Message then looks at dialogue, seen in many ways: with culture, which needs a new alliance between faith and reason; with education; with science which, when it does not close man in materialism, becomes an ally for the humanisation of life; with art; with the word of economy and work; with the ill and suffering; with politics, where an uninterested and transparent involvement towards the common good is asked for; with other religions. In particular, the Synod emphasizes that inter-religious dialogue contributes to peace, refutes fundamentalism and denounces any violence against believers. The Message recalls the possibilities offered by the Year of Faith, by the memory of Vatican Council II and by the Catechism of the Catholic Church. Finally, it indicates two expressions of a life of faith, which are especially meaningful for new evangelization: contemplation, where silence allows for the better reception of the Word of God, and service to the poor, in the view of recognizing Christ in their faces.

“In the last part, the Message looks at the Church in the various regions of the world and addresses a word of encouragement for the proclamation of the Gospel to each of them: to the Eastern Churches wishing to be able to practice faith in conditions of peace and religious freedom; to the African Church asking to develop evangelization in the encounter of ancient and new cultures, calling then upon governments to cease conflicts and violence. The Christians of North America, who live in a culture with many expressions distant from the Gospel, must look towards conversion, to being open to welcoming immigrants and refugees. Latin America is invited to live the permanent mission to face today’s challenges such as poverty, violence, even the new conditions of religious pluralism. The Church in Asia, even while being a small minority, often placed at the edges of society and persecuted, is encouraged and exhorted to the steadfastness of faith. Europe, marked by an even aggressive secularization and wounded by past regimes, has nevertheless created a humanistic culture capable of giving a face to the dignity of man and to the building of the common good; today’s difficulties therefore must not dishearten European Christians, but must be perceived as a challenge. Oceania is asked to feel once again the involvement of preaching the Gospel. Finally, the Message closes with trust in Mary, the Star of New Evangelization”.