As Father George John, M.S.T. was preparing for his First Holy Communion his sister asked him a question that would forever change his life. “What will you ask God when Jesus comes to your heart?” 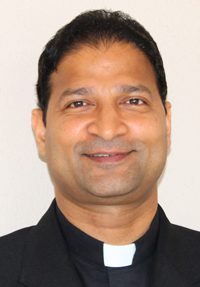 As Father George John, M.S.T. was preparing for his First Holy Communion his sister asked him a question that would forever change his life. “What will you ask God when Jesus comes to your heart?” Unsure how to answer, his sister suggested that he pray to become a priest.

“That was my first feeling of a vocation,” remembered Father John. “Later, when my older brother became a priest, his life also inspired me.”

Father John studied for the priesthood at three seminaries in southern and central India before being ordained on April 13, 1991 with the Missionary Society of St. Thomas. He reflects that the mission of the Society and the words of St. Thomas in the Gospel of John resonated with him deeply, “So Thomas, called Didymus, said to his fellow disciples, “Let us also go to die with him.” (Jn 11:16)

“St. Thomas the Apostle brought Christianity to India,” explained Father John, “so that very name attracted me a lot. The Missionary Society of St. Thomas works among less Christian areas as missionaries and among the Christian migrants.”

His priestly ministry began following in the footsteps of St. Thomas, as a missionary in a northern part of India. He has had various roles over the years including school manager, nearly 10 years as a teacher in the seminary, and as a parish priest in northern India and the Diocese of Marquette in Michigan. His missionary work continues in the Diocese of Orlando where he has been ministering to the Syro-Malabar Catholic community in Central Florida at St. Mary Syro-Malabar Catholic Church since January 2013.

The Syro-Malabar Church, founded by St. Thomas the Apostle, is the second largest Church among the Eastern Catholic Churches. There are an estimated 100,000 Indian Catholics following this rite in the U.S. and Canada.

“Though I have been involved in various priestly ministries, life as a parish priest is very fulfilling. One person, after I heard the individual’s Confession and gave the absolution, told me ‘If I ever go to Heaven, it’s because of you’.”