From his childhood in Manerbio, Brescia in Northern Italy, Father Vincenzo Ronchi, C.S. already felt a call to the priesthood. 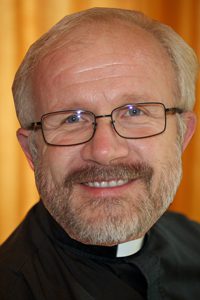 From his childhood in Manerbio, Brescia in Northern Italy, Father Vincenzo Ronchi, C.S. already felt a call to the priesthood. His parents and uncle especially inspired him with their lives of faith and service. His uncle, a diocesan priest, organized various social ministries including a lay missionary group of volunteers, called GRIMM (Italian acronym for Group for Missionary Service) that still continues to organize missionary camps in third world countries to assist missionaries build houses, school, churches, and hospitals.

“One of the volunteer members of this missionary group was my father,” remembered Father Ronchi. “For over 20 years he would spend his vacation, and money, and energy working in these missionary camps for two or three weeks every year. My mother too inspired me as a catechist for many decades in our local parish.”

Father Ronchi attended minor seminary in Northern Italy, did his novitiate in the Marian city of Loreto,  completed his theological studies at the “Angelicum”, St Thomas University and licentiate in Theology at the Gregorian University, in Rome before being ordained by the Bishop of Brescia on April 13, 1991 for the Missionaries of St. Charles Borromeo (Scalabrinians).

“At first all I wanted was to be a missionary, an adventurous, traveling priest so to speak. The Scalabrinian Missionaries visiting the seminary would evoke in me images of far-away lands where I could be a minister of the Lord,” recalled Father Ronchi. “Later, as I became involved in ministry to a community of Cape Verdean immigrants in Rome, I became passionate about serving migrants, which is the specific calling of the Scalabrinian Missionaries.”

Father Ronchi speaks fluent Italian, Portuguese, Spanish, and English, which has been useful to him as his missionary ministry has taken him all over the world. He has served as a parochial vicar in Ontario, vice rector of the philosophical seminary in Bogotá, Colombia, parochial vicar in Brooklyn, New York and chaplain of the Portuguese-speaking community of Manhattan, New York. In June of last year, he was transferred to Resurrection Parish in Winter Garden where he currently serves as parochial vicar. He also served at parishes in Delray Beach, Florida and Riverdale Park, Maryland.

Reflecting on his 25 years as a priest, Father Ronchi finds it difficult to summarize the blessings he has experienced but says certain memories and experiences do stand out.

“I have no doubt that some of the best moments were during World Youth Day celebrations, for the enthusiasm and amazing experience of catholicity of the Church,” said Father Ronchi. “Also, the pastoral work in the “Barrio Lisboa” in the outskirts of Bogotá, with poor people that had been internally “displaced” by the armed civil conflict.”