A Pilgrimage to the Shrine of Mary, Queen of the Universe 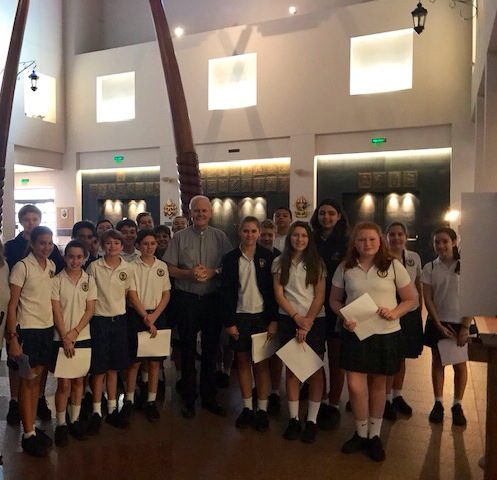 Seventh grade students from St. Mary Magdalen Catholic School in Altamonte Springs set out on a pilgrimage to the Basilica of the National Shrine of Mary, Queen of the Universe in Orlando, Friday, February 8. They went to learn more about this unique place of worship which is also a big tourist attraction, built next to Disney World and Universal Studios. Because this church fosters a special devotion – in this case to Mary, Queen of the Universe – it is called a shrine. In 2007, Pope Benedict XVI designated the shrine as a Minor Basilica.

As the students arrived, the were greeted by an impressive bronze sculpture of St. Michael the Archangel which stands guard at the entrance, welcoming pilgrims. The students went on a tour in the morning and visited the Universe Chapel, where they saw a beautiful mural of St. Juan Diego and Our Lady of Guadalupe. They looked at the stained glass windows inside the church, took pictures in front of the bronze doors, and visited the Mother and Child Outdoor Chapel. At noon, the students celebrated Mass and received the blessed Sacrament of Holy Communion. After lunch in the rosary garden, they walked through the art museum, filled with beautiful paintings depicting Mary, and bought souvenirs in the gift shop.

Very Reverend Paul J. Henry, the rector of the basilica, has been at the shrine for eight years, and was the pastor of St. Mary Magdalen Catholic Church before he was assigned rector of the Shrine. Father Henry explained, “We welcome many people from all around the world and usually have 2,000 people seated at weekend Mass.” He added, “My favorite part is that we are able to provide a beautiful place for people who need to have a sanctuary to pray and get away from crowds, or disconnect from the rest of the world.”

As rector is not a name you hear often, the students asked him to explain. “A rector is a special name given to somebody for a holy ministry given by the bishop.”

Visiting the shrine strengthened the students’ knowledge of the Catholic faith because of the symbolism present in the design of the water fountains, the gardens and the church. Perhaps the most impressive symbolism throughout the Shrine was water. It is water, beneath a bridge, that introduces the pilgrim to the grounds of the Shrine. The water is a symbol of our Baptism. Once you enter the narthex, the architect continued to display the theme of water represented by the ripples on the glass doors to the nave. The students learned how the church has always expressed the faith through the visual arts and the Basilica of the Shrine of Mary, Queen of the Universe, is no exception.