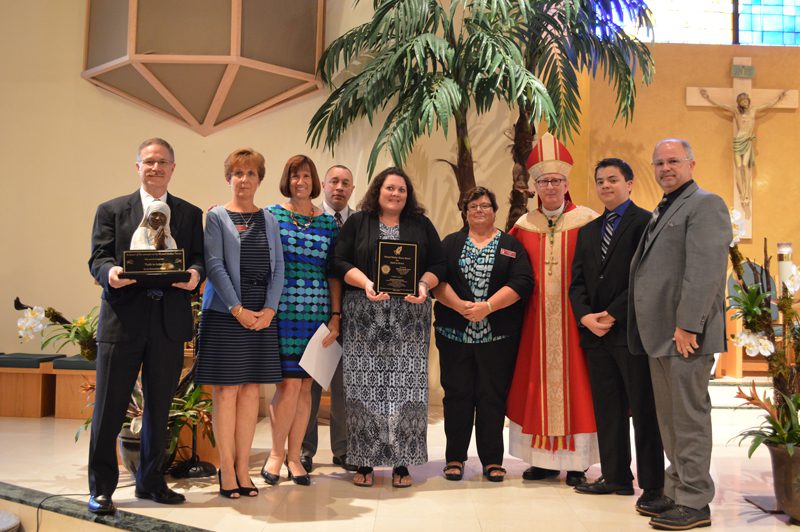 All Souls Catholic School and Bishop Moore Catholic High School were awarded the Diocese of Orlando’s fourth annual Blessed Mother Teresa Award, given in recognition for service projects completed during the 2014-2015 academic year. Representatives from both schools accepted the award during the Diocesan Teacher Kick-Off event, held Aug. 10, 2015 at Holy Family Catholic Church. 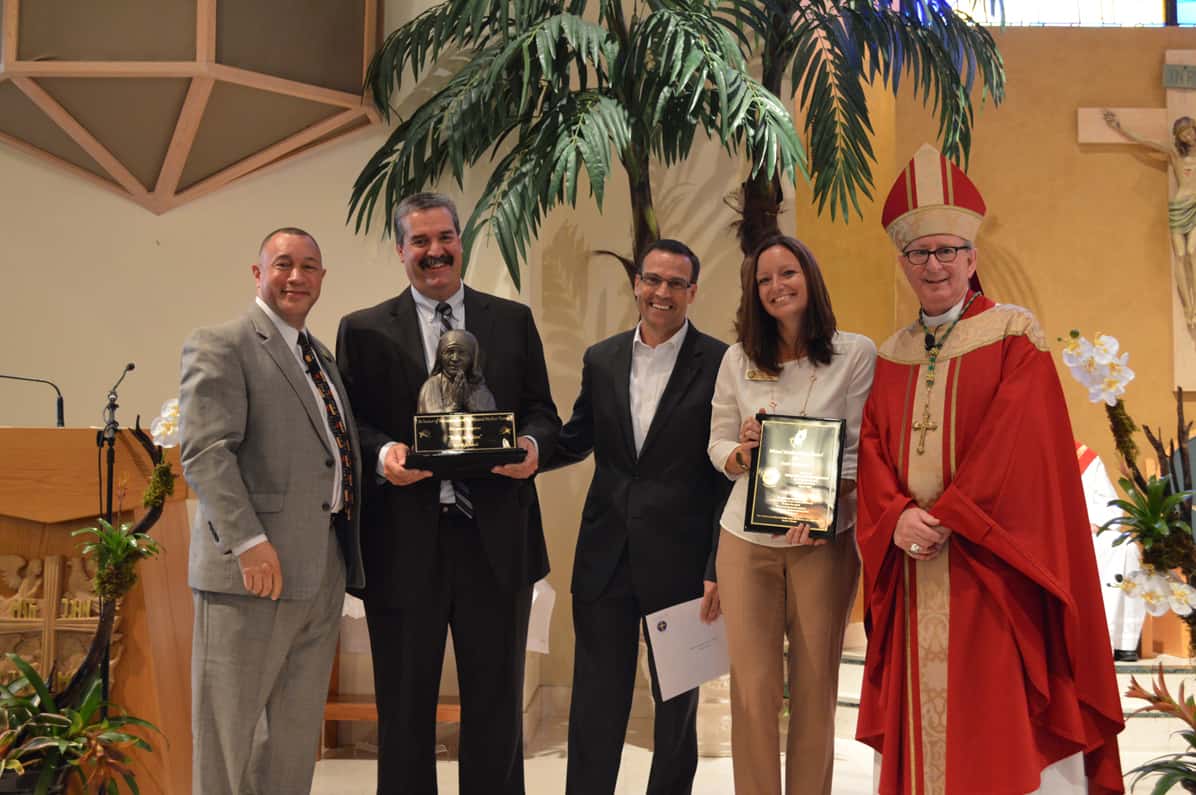 “The reason we began this award was to highlight the corporal works of mercy that Mother Teresa exemplified throughout her life,” said Henry Fortier, superintendent. “We wanted to make sure that we highlighted in our schools all of the amazing acts of charity and generosity that our students do every day.”

All Souls was recognized for its “Helping Hands for the Heneghan’s” project, which centered on the prayer and care of the Bobby Heneghan family during the unexpected illness and passing Mrs. Jenni Heneghan, who served as principal until her death in March. When Mrs. Heneghan fell ill, students, faculty, staff, and parents rallied around the family, making cards for Mrs. Heneghan and her family. The student body prayed daily in the courtyard before school and the students as well as the parishioners prayed a healing rosary after our weekly school Mass.  The faculty collected gas cards, restaurant gift cards and assorted snacks for Mr. Heneghan and son, Colin,  as they visited the hospital daily.

At her funeral the student choir asked to participate as they all knew how much Mrs. Heneghan loved to hear them sing.  After the death of Mrs. Heneghan, the faculty, staff and parents are provided meals for the family twice weekly. The National Junior Honor Society, Student Council and the Athletics Club students also held fundraising events for the family.

“The All Soul Community was honored to receive the Blessed Mother Teresa Award for Faith in Action,” said Kathleen Kiley, principal. “The sudden death of their principal, Mrs. Jenni Henneghan, last spring devastated the community. They drew on their deep faith to support the family during their time of grief. “

“Just like Blessed Mother Teresa, the entire student body did small things with great love,” she continued. “The permanent plaque, hung in the front office, will remind us of our beloved principal and the impact ‘faith in action’ can have on a community.”

The event focused on the two greatest commandments – love of God and love of neighbor. The theme was brought to life through music, skits, small group discussions, and crafts. Morning Star students were engaged throughout the retreat and returned to the classroom inspired and spiritually renewed.

The retreat is an example of the many acts of service at BMCHS, both at home and abroad. BMCHS students continually work with Morning Star not only through the Peer Ministry program, but also through Best Buddies, sharing liturgies, sports camps and shared classes.

Both schools received a statue of Blessed Mother Teresa, which will remain on campus until next year’s winners are announced, a plaque to display permanently in its building, and $1,250 to give to its favorite charity.