Father Tim Daly, Pastor of the Basilica of St. Paul in Daytona Beach asked school children and parishioners to gather near the church entrance on Dec. 8 to witness the opening of the Holy Doors on the Solemnity of the Immaculate Conception of the Blessed Virgin Mary. 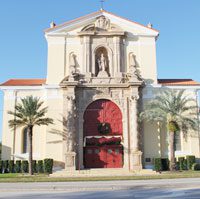 Father Tim Daly (pictured below), Pastor of the Basilica of St. Paul in Daytona Beach asked school children and parishioners to gather near the church entrance on Dec. 8 to witness the opening of the Holy Doors on the Solemnity of the Immaculate Conception of the Blessed Virgin Mary.

The church’s front entrance features four massive red doors that are made of cypress wood and are over 100 years old. They have previously only been used on the Easter Vigil because of the symbolism for the catechumens entering the Church as they are about to be baptized, entering to find Christ.

Now the doors will be open before each celebration of Mass and unlocked when the church is open for prayer and tours. Father Daly hopes people from around Central Florida will take a pilgrimage to the Basilica of St. Paul during the Year of Mercy. The Divine Mercy chaplet is prayed and sung each Sunday at 3 pm in the church. 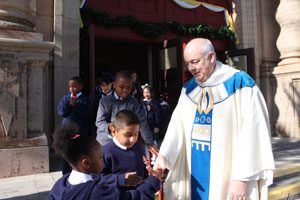 Although Bishop John Noonan has designated the official Holy Door for the Basilica of the National Shrine of Mary, Queen of the Universe, parishes are given the opportunity to create a door of mercy so that every church will be directly involved in living out this Holy Year as an extraordinary moment of grace and spiritual renewal.

During Father Daly’s homily at Mass on Dec. 8, he spoke of the Blessed Virgin Mary, who is sometimes called the Queen of Mercy or the Mother of Mercy.

“Today we celebrate the Feast of the Immaculate Conception,” Father Daly began.

“When Mary was conceived she had no sin, not like the rest of us who are born with sin. So what takes away our sin is our Baptism, and when we were sprinkled today with

Holy Water it reminds us of our Baptism.”

Father Daly also noted the importance of the Jubilee Year of Mercy with Mary as our example.

“So what does it mean for us – how should we live this year? Well the Pope is telling us we should live with mercy. Today we begin this life of Mercy, just like Mary.”

During the Extraordinary Jubilee of Mercy, Pope Francis has invited the entire Catholic Church to refashion itself as a place not of judgment or condemnation but of pardon and merciful love.

Father Daly encourages everyone to be as wholeheartedly open as Mary was when she brought forth the physical embodiment of mercy, Jesus.

“Mary opened the doors of her heart to let Christ come in and we have to do the same, to let Christ into our lives,” said Father Daly.

The Basilica of St. Paul has a long history in the Daytona Beach community, dating back to the late 1800s. St. Paul has served as “mother church” to six parishes in Volusia County. The church has a unique and striking architectural style. It was built in Spanish mission style and features pre-16th century Renaissance style arches within the interior and more than a dozen statues representing the saints, and also the Divine Mercy of Jesus. There are 22 transept and 12 rose windows, which depict the lives of Jesus, Mary and other saints and there are 16 smaller stained glass windows along the outer walls in the upper part of the church.

On January 25, 2006 (Feast of the Conversion of St. Paul), Most Reverend Thomas Wenski, former Bishop of Orlando, celebrated a Mass during which the designation of St. Paul as a minor basilica by Pope Benedict XVI, was publicly read.

When Father Daly was asked who is invited to enter the door of mercy? His response, “Anyone who wants to know the Lord.”

Groups and individuals are welcome to call to schedule a tour of the church as part of their pilgrimage.