The Coat Of Arms of Most Reverend John Noonan, Fifth Bishop of Orlando 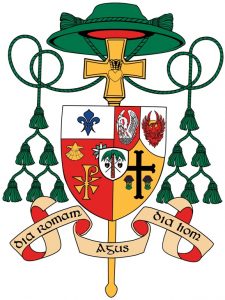 The coat of arms of Bishop John G. Noonan, fifth bishop of the Diocese of Orlando combines diocesan (left half) and personal (right half) elements. These elements have special meaning that are personal and spiritual; temporal and eternal – reflecting not only his life experiences, but his faith journey as well.

On the left side of the shield, for the Diocese of Orlando, the main colors of red and gold recall the colors of the flag of Spain, for it was missionaries from that country who first brought the Gospel to Florida. The Chi-Rho (X-P) is taken from the two first letters of the Greek word for Christ, the Son of God and the center of all Christian faith. The golden shell is a traditional symbol for the Apostle St. James the Greater, patron of the Cathedral. The orange blossom indicates that the nine counties of the diocese are centered in Orange County.

In the upper portion of the diocesan arms is a blue fleur-de-lis on a background of white or silver. This is in honor of the Blessed Virgin Mary, the Mother of God and the patroness of the Diocese of Orlando.

On the right side of the shield is the personal coat of arms of Bishop Noonan. It is divided among fields in the same fashion as the coat of arms of Pope Benedict XVI as a way to honor the Holy Father who elevated him to the Office of Bishop.

The area to the left is rendered in blood red. This represents the Precious Blood in the Eucharist. Upon this field appears one of the most ancient symbols in Christian art, the Pelican. Since the first century after Christ, the Pelican has represented both the Church Universal and the Eucharist.  As depicted in Bishop Noonan’s coat of arms, the Pelican is seen piercing her own breast and represents Christian sacrifice and a filial love for God the Father. Bishop Noonan specifically selected this image to commemorate the Year of the Eucharist, which was promulgated by the late Pope John Paul II in October 2004, the liturgical year in which was raised to the episcopal dignity.

On the right side of Bishop’s Noonan’s shield the field is silver or white, representing innocence of soul and the holiness of Christian life.

It is customary for bishops to adopt an emblem from their family arms. Bishop Noonan has chosen a red phoenix arising from a bed of flames. The arms of the Noonan family include a silver field on which appear three fierce red falcons. The bishop has adapted this inspiration to appear in singular form as the spiritual mythical beast known as the Phoenix. The Phoenix is the symbol of the Resurrection of Christ and Christian triumph over sin and death and when it appears with a halo, as in the case of Bishop Noonan’s arms, it also represents the person of the Risen Christ.

After the Middle Ages, the Church also assigned the Phoenix to the attribute of chastity and is therefore one of the emblems of the celibate clergy. The gold halo represents both the Wisdom of God the Father and the Trust that Christ places in the men He calls to the fullness of Holy Orders.

The bottom field is gold, which once more represents the Wisdom of God. Bishop Noonan chose a special place in his design to honor the Curé d’Ars, Saint John Vianney. This French priest is the patron saint of the seminary in Miami, where Bishop Noonan served as rector and the patron of all parish priests everywhere.

In a homily entitled “Harvest Crosses,” Saint John Vianney tells a story about local farmers who hid small wooden crosses in the earth which were later discovered by migrant farmers and inspired prayers of thanksgiving and praise for God.  On the gold field of wisdom, tied bundles of lavender appear representing the actual harvests of both Saint John Vianney’s farmers and metaphysically speaking, of Christ with His flock. Between them appears a black Cross Moline, which is a heraldic adaptation of the Christian Cross assigned to represent France. The lavender plant has been regarded as a safeguard against evil and as Christ’s herb. Bishop Noonan will be the first person to ever bear the heraldic emblem of the cross between two garbs of lavender as they relate symbolically to the Curé d’Ars.

Over the bishop’s coat of arms, is found a small silver shield (rendered in heraldry as white) and which once more symbolizes innocence and purity of soul. The palm represents the Church of Miami and is a special way of honoring the Archdiocese and people of Miami. Behind the palm appears two staffs with gourds, or haversacks. These staffs are the main heraldic symbol of Saint Raphael the Archangel whom Sacred Scripture tells us was the guardian of the pilgrim Tobias. Together these emblems represent the spiritual journey, or pilgrimage, that each Christian makes in life.

One additional remembrance of the bishop’s native Ireland is the inclusion of the episcopal cross with crowned heart positioned above the shield which is a variation of a Claddagh emblem. The Claddagh has come to represent the love of Irishmen abroad for their homeland.

The green pilgrim’s hat is the traditional emblem that adorns a bishop’s crest. For bishops, there are six tassels suspended on either side of the hat in a pyramidal style. The color green is the true color of the Office of Bishop and as the color of growth and renewal, also suggests eternal life.