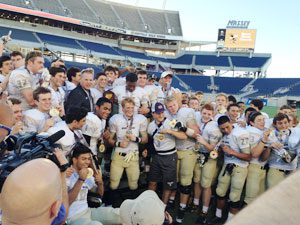 Prayer and Faith were Part of the Game Plan

Besides spending months of intense practice on the field, they also spent time in intense prayer and started a new tradition that kept their focus on winning for the right reasons, for the glory and honor of God.

During training camp in August, the team gathered for the celebration of Mass and each member of the team was asked to put their name on a large rock along with the words, “1 Moore for the Glory of God.” Each athlete was also asked to write down on a card one thing they would do – or abstain from doing – for the honor and glory of God.

These cards were then placed in a box that traveled with the team all year. Also, each player picked a rock with the name of their teammate on it and prayed for that person throughout the season.

Before each home game, the tradition of the “rock walk” was started. The players walked together from the locker room carrying their rocks to three crosses located at the east end of the stadium and placed the rocks at the foot of the crosses.

Also, Benediction was integrated into the program. During the football season, the team would gather each week in the church with Father DuWell and spend 15 minutes of silent medication and prayer before the Blessed Sacrament followed by group prayer and singing of “Holy God we Praise thy Name.”

This continued until the last game of the season. Before Friday’s championship match, the team gathered at St. Charles Borromeo Catholic Church for Benediction with the Blessed Sacrament. Among those gathered were Bishop John Noonan and Henry Fortier, superintendent of Catholic Schools, Third Order Regular Franciscan Father Anthony Aarons and Father DuWell, pastor of St. Charles Borromeo Parish.

“Benediction was always part of the program back in the 60s and 70s when I went to Bishop Moore. Coach Nelson led us before every game to St Charles. Various things have been started and done over the years — prayer services, the celebration of Mass before games. This year, it was suggested to bring back Benediction,” said Malatesta.

Many prayers of thanksgiving were no doubt offered after the team won the Class 5A state championship game against Wakulla, 37-34 at the Orlando Citrus Bowl in front of nearly 5,000 fans. After taking the lead in the fourth quarter, they maintained the lead and won the game, for the honor and glory of God.