Bishop Noonan to Ordain Two Men to Priesthood on May 23

On May 23, Bishop John Noonan will ordain transitional deacons Joshua Swallows and Christopher Dorsey to the priesthood, during the celebration of Mass at St. James Cathedral. Their ordination is the culminating event in a seven-year journey to serve and minister to God’s people. 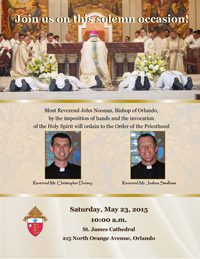 On May 23, Bishop John Noonan will ordain transitional deacons Joshua Swallows and Christopher Dorsey to the priesthood, during the celebration of Mass at St. James Cathedral. Their ordination is the culminating event in a seven-year journey to serve and minister to God’s people.

Deacon Josh Swallows, 34, first heard God’s call to the priesthood while studying at Florida State University. He said while the priests and brothers of the campus ministry were always encouraging the young people to consider a vocation to priesthood and religious life, he was afraid that not having a wife and children would mean being alone.

However after he began working in campus ministry at the University of Central Florida, he learned he “loved ministry.” He was also surprised at the fulfillment he experienced by serving God’s people.

“I guess I always imagined ministry as ‘I love God so much that somehow I’m going to go out and bless the world with this love that I have for God,’” Deacon Swallows said. “But what surprised me is that it wasn’t just that – yes of course it was a love that I had for God – but I truly loved these people.

“It was as if they were my younger brothers and sisters,” he continued. “I could easily see how the life of a priest was not one that was without intimacy.”

As the date of his ordination nears, Deacon Swallows said he is excited and “slightly terrified” by the ministry that is “so much bigger than me.” Still, he feels well prepared for the day he will be called Father Joshua Swallows.

“The Lord is faithful, he’s always there,” Deacon Swallows said. “That is a big way that my relationship with God has grown over the years. In many ways he has taught me to trust him. He’s going to be there.”

Deacon Swallows, a parishioner of Most Precious Blood Parish in Oviedo, is the son of James Swallows and Tina Wozneski. He has a sister, Becky Hoss.

Deacon Dorsey, 28, grew up attending Holy Name of Jesus Parish in Indialantic with his parents, Leo and Mary, and siblings, Candice and Nicholas. He, too, felt God’s calling shortly after entering college — the University of Central Florida — to study biology.

“My first response was ‘No thank you. I’m studying biology, I’m happy doing that. I don’t want to be a priest,’” he said.

Still, the voice persisted, calling him to the priesthood.

Deacon Dorsey ultimately earned his bachelor’s degree in English from UCF in 2008 and shortly thereafter, entered St. John Vianney College Seminary in Miami. It is interesting to note that Deacon Swallows was Deacon Dorsey’s campus minister during his undergraduate years at UCF.

Deacon Dorsey said his seven years in the seminary have been “a blessed, grace-filled experience.”

Co-sponsored by the Archdiocese for the Military Services, Deacon Dorsey’s journey to the priesthood has been unique in that he has also been studying to serve the U.S. armed forces as a soldier and military chaplain. After his ordination, Deacon Dorsey will minister in the Diocese of Orlando for three years. After that, he will become active in the army and will serve the men and women in the military wherever he is assigned. He will return to the Diocese of Orlando when his military career ends.

Deacon Dorsey said he is ready to serve God’s people in whatever capacity he is called.

“I have spent seven years in the classroom preparing to become a priest,” he said. “I look forward to being with the people, celebrating the Sacraments, celebrating Mass, hearing confessions, visiting the sick. It’s all the things that I’ve wanted to do the last few years– that I’ve been called to do. Now I finally get to go out and be a sign of the Church, a sign of Christ’s love for the world.”

The faithful are invited to join in the celebration as Bishop John Noonan ordains transitional Deacons Christopher Dorsey and Joshua Swallows to the priesthood Saturday, May 23, 10 a.m., at St. James Cathedral, 215 N. Orange Ave., Orlando.

Complimentary Valet Parking will begin at 8:30 a.m.
Remote parking with bus transportation will be available.

To accommodate all participants in the celebration of Mass, overflow seating will be provided in the Parish Hall.

The Mass also will be live streamed at http://live.orlandodiocese.org/.