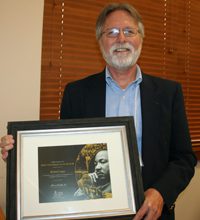 Richard Logue, Catholic Charities of Central Florida Director of Immigration and Refugee Services has been recognized by Catholic Charities USA with the “Keep the Dream Alive” award for 2016. This award celebrates individuals who have demonstrated a commitment to poor and disenfranchised people and are living out a passionate commitment to making the dream of Rev. Dr. Martin Luther King Jr. a reality.

For 41 years Richard Logue has dedicated his life to the Lord’s call to “welcome the stranger.” In 1975, Logue launched the department with then-seminarian John Giel, now pastor at Holy Family Catholic Church in Orlando. Since then, Logue has grown the program from a staff of two to a team of more than 60, many former refugees themselves. His team describes him as passionate and humble in his work with thousands of families from over 100 countries around the world. He has been a case worker, grant writer, mentor and advocate for the rights and human dignity of immigrants and refugees seeking safety and opportunity in the United States.

Over the years, he has advocated for social justice and immigration reform. As a grant writer, he has networked with agencies, churches, law schools and community resources to help the families we serve become self-sufficient, including: The Department of Children and Families, United States Citizenship and Immigration Services, Hope CommUnity Center and Barry University.

As director, he has been a mentor to staff as they guide and care for their clients. Though he may not speak the many languages of the families he has served, he has been their mentor offering them hope and mercy as they dream of a new life in the United States free from persecution, violence and extreme poverty.