More than 6,000 Catholic school educators are in Orlando for the National Catholic Educational Association Convention & Expo. This is the first time the NCEA has held their annual convention in Florida, and this event is shining the light on the students in the Diocese of Orlando who are excelling in many areas.

To view photos of the opening liturgy and general session, click here. 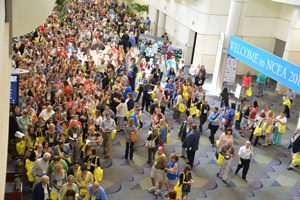 More than 6,000 Catholic school educators are in Orlando for the National Catholic Educational Association Convention & Expo. This is the first time the NCEA has held their annual convention in Florida, and this event is shining the light on the students in the Diocese of Orlando who are excelling in many areas.

During the opening ceremony on April 7th more than 100 students processed into the exhibit hall waving flags from the many countries that represent their heritage.

“Our church is a global church, so it’s natural for our schools to be global schools,” said Jacquelyn Flanigan Associate Superintendent for Professional Development, Office of Catholic Schools, Diocese of Orlando. “Part of our social justice mission is to serve all students.”

Diocese of Orlando schools have seen growing enrollment with more than 600 new students since 2010. Also, our students score 20 percent above the national average in the Iowa Assessment. We have a 99% graduation rate and seniors at our five high schools earned $35 million in college scholarships.

“God put us here as a community of faithful working together in partnership and setting standards – making sure there is a certain quality we’re providing our students. When we go home to meet our maker we will answer for what we did and did not do,” said Henry Fortier, secretary of education and superintendent of Catholic Schools for the Diocese of Orlando.

“We have been given God’s most precious gift. We can do nothing less than provide the very best education we can provide,” he added.

The NCEA convention is also a global convention with attendees from all over the United States as well as the Caribbean, Canada, Germany, Japan, the Netherlands, the Philippines, Spain and Thailand and more.

The convention is offering more than 300 professional development workshops, faith-filled liturgies, networking events and an expo hall with more than 200 exhibitors.

Nelson Matthew, assistant director of the mission office, attended the convention and said he has gained so much knowledge and he is looking forward to sharing this knowledge with teachers in the Dominican Republic. He is administrator for the five schools operated by the Diocese of Orlando in our sister diocese in the Dominican Republic. He leaves April 12 for a one month mission trip.

“We need to bring technology to the students in the Dominican Republic. This experience has impacted how I will train the teachers so they can implement blended learning and incorporate technology,” said Matthew.

The Diocese of Orlando Office of Catholic Schools has been working for two years to plan the NCEA convention. Part of their mission was to mobilize more than 1,300 volunteers. Catholic school volunteers have given up their spring break time to help in a variety of roles, from setting up displays to serving as bus greeters and musicians.

There has been a big emphasis on hospitality with an army of volunteers walking the convention center halls – easily identifiable by their flamingo headbands. They have been welcoming participants, answering questions and providing directions.

“My hope is that everyone will experience the best hospitality and feel welcomed,” said Fortier.

Having the convention in Orlando has made the convention accessible to so many of our local teachers. Judi Dry, first grade teacher of St. Joseph Catholic School, Winter Haven attended the NCEA convention for the first time. She volunteered as a bus greeter welcoming students and chaperones who are arriving around the clock to provide entertainment in the expo hall. She has also attended professional development sessions. She has learned new ideas for addressing behavior issues and positive classroom management during a session about connecting the dots between discipline and discipleship.

Dry has taught for 16 years at St. Joseph Catholic School and 30 years overall.  “This type of continuing education is important so we can learn new ways to teach and address the challenges that arise. When I first started teaching, there were no computers in the classroom. I am now learning to incorporate technology and integrate the use of ipads and other tools into learning.”

Many local education experts were selected to lead professional development sessions at NCEA. Father Tim Labo and Gloria Del Orbe, pastor and principal of Holy Redeemer Parish and School, Kissimmee spoke on the important partnership between principal and pastor for the success of a Catholic school.

Anita Brady, from Ascension Catholic School and Lisa Jones from Annunciation Catholic Academy spoke about the best tools that are compatible for ipad, windows and android environments.

There are 41 local presenters out of the total 410 presenters leading breakout sessions. The convention wraps up April 9. A two-day post-conference “Catechist Days” will be held April 9-10 and is open to all ministry volunteers, catechists, lay ecclesial ministers, clergy and interested parishioners. Presenters will offer sessions in English and Spanish on a variety of topics- many with a “family” theme.

“Hosting this conference has brought us closer together as a community of Catholic educators. We have spent two years planning and preparing. In that process we have grown much closer as a faith community,” said Fortier.

To view photos of the opening liturgy and general session, click here.