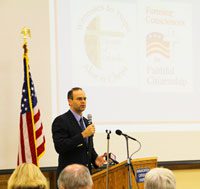 Nearly 500 Catholics from throughout the Diocese of Orlando gathered to hear Bishop John Noonan and other national and state leaders speak on faithful citizenship and religious freedom, as well as why Florida constitutional amendments 6 and 8 are supported by the Catholic Church and people of faith, during a special two-hour presentation, hosted by the diocese on Sept. 24 at Annunciation Catholic Church in Altamonte Springs. Participants also viewed a video message delivered by Cardinal Timothy Dolan, archbishop of New York and president of the U.S. Conference of Catholic Bishops (USCCB).

In his address, Bishop Noonan said we are called to be involved in the political process and to exercise our obligation to vote as informed believers.

“As Catholics, we seek to advance the common good, not our own individual political agenda or party. We are to carefully discern which public policies are morally sound by the measure of our Catholic teaching and determine where the candidate stands on these policies, especially those that impact the most vulnerable members of our community, such as the human embryo, the unborn, elderly, those with disabilities, and the undocumented, the poor, the powerless and those who have no voice at the table where public policy is made, are a concern to us.”

He encouraged Catholics to become informed on the issues by being open to the truth through the study of Sacred Scripture and the teachings and traditions of the Church. After examining the facts and background information about the issues, Bishop Noonan said we should prayerfully reflect on the will of God. To help us prepare as people of faith for the election, Bishop Noonan suggested that Catholics participate in a novena, nine days for prayer that will begin Oct. 28 and conclude on Nov. 5.

“Faith helps us see more clearly the fundamental truth that all life is sacred, all life is valuable and must be protected and treated with dignity and respect if God is truly the creator of all life,” he said.

Kathy Saile, director of domestic policy for the USCCB reiterated the Bishop’s message, saying that Catholics across the nation are called to political responsibility guided by the USCCB’s statement Forming Conscience for Faithful Citizenship.

“Forming Conscience for Faithful Citizenship has a clear purpose,” she said. “It is about forming consciences. It is not a voter’s guide or a score card. It is the message of the bishops in their role as teachers and pastors, not political organizers. It leaves decisions to the voters’ conscience, but well-formed consciences. It provides greater clarity and attention to distinctions and links among those issues. In other words, it calls people to bring their faith to politics instead of their politics to their faith.”

Rounding out the event, Michael Sheedy, associate director for health of the Florida Conference of Catholic Bishops summarized Florida constitutional amendments 6 and 8. In short, amendment 6 paves the way for the restoration of parental rights regarding their children’s education, health and well-being, especially in regards to life-changing medical procedures such as abortion. The amendment would also prohibit the use of taxpayer dollars to fund abortions.

Known as the Florida Religious Freedom Act, amendment 8 ensures the time-honored public-private partnerships between government and social service organizations, and brings the Florida constitution in line with U.S. constitution. It calls for the deletion of a section of the state constitution that is considered discriminatory and that addition of a sentence that says the government cannot deny funding on the basis of religious beliefs.

“Amendments 6 and 8 will enable Florida voters to enact policies that will pave the way to further the cause for life and liberty here in Florida for decades to come,” Sheedy said.

Robin Delaney, a parishioner at Annunciation Catholic Church, said the presentations offered more than she expected. “I wanted to make sure my thoughts were aligned with our church leaders’. I did not want to vote along a party line. I want to vote along the Catholic line. I have received good information, and not just for the next four years, but for all around. I feel I have been called to action.”