Celebrating the Pope of the Youth

On Wednesday, Oct. 22, the St. Mary Magdalen Catholic School 7th grade boys led the school’s weekly Wednesday Mass. They were able to celebrate the first feast day of Pope St. John Paul II. Seventh grader Patrick wore a costume of the white vestments worn by a pope and gave an introduction speech on the New Evangelization, which the saint introduced to the Church when he was Pope. 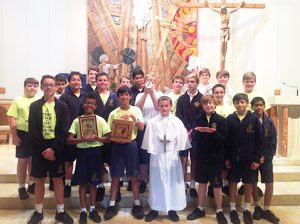 According to the New Evangelization, we, the laity, have the responsibility to evangelize each other. John Paul II suggested that we use the social media we have at hand as a good way to evangelize.

After the offertory procession, three items were brought up representing the spirituality of Pope St. John Paul II. One item was a handkerchief that touched a relic of St. John Paul II at the Basilica of Our Lady Queen of the Universe. The relic was displayed at the Basilica this past August. The second item was an image of Our Lady of Czestochowa, otherwise known as the Black Madonna, who St. John Paul II was devoted to. The last item was a Rosary made with beads in the form of roses, a gift that the Pope gave to the heads of state when they visited the Vatican.

Patrick commented, “Though it was fun to dress like the Pope, I now know that he was truly an amazing and giving person.”