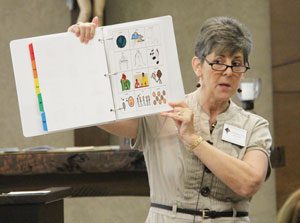 Jackie Smart can name each of the 22 men, women and children with special needs who have received the Sacraments during the seven years she has served as faith formation director at St. Mary of the Lakes Catholic Church, Eustis. While all hold a special place in her heart, a 33-year-old man with Down syndrome named Mark epitomizes the very reason she takes extra care in reaching out to God’s most vulnerable population.

After being introduced to Mark’s parents, Smart learned that Mark had been baptized and received Holy Communion but had not received the Sacrament of Confirmation because of his disability. Smart thought there had to be a way to make this possible. She began the preparation process with Mark and last fall he was confirmed.

“Mark suddenly passed away a few months ago,” Smart said, tears welling up in her eyes. “It touched his family that we had reached out to him and were able to fully initiate him in the Church. They said it changed him. I felt so privileged to be a part of that experience, and I want to be able to reach out to more people.”

Smart was among a group of catechists and parents who participated in a workshop, “Catechesis for People with Disabilities,” Aug. 9 at the Catholic Center at Northview on the campus of the University of Central Florida. Sponsored by the Diocese of Orlando Secretariat for Evangelization and Family Life, the workshop featured nationally known expert Charleen Katra (pictured), chair of the Autism Task Force for the National Catholic Partnership on Disability (NCPD).

During the day-long training session, Katra delved into such topics as disability ministry, social justice, tips and strategies for reaching out to those with autism, successful lesson planning and learning styles. A session for clergy, catechetical professionals and lay ecclesial ministers was held Aug. 8.

Katra said full inclusion for all of God’s children should be everyone’s goal.

“No situation or circumstance should prevent someone from faith and formation,” Katra said. “We can’t say at church that everyone is welcome if we don’t have that welcome sign in our hearts.”

Dennis Johnson, Jr., secretary of Evangelization and Family Life Secretariat, said most people know of a family or have a family with special needs, whether it is autism, Alzheimer’s disease, hearing impairment and the like.

He said he hoped for three outcomes as a result of the workshops – a greater awareness in parishes for those with special needs; from that awareness, more support for families; and a more formalized commitment from each of our parishes to want to do more.

“I hope this will be a start to go into a broader picture of support and that can lead to bringing people to the Lord through the Church.”

Smart said that the workshop affirmed that St. Mary of the Lakes was moving in the right direction in reaching out to those with disabilities. She said the resources provided at the workshop will augment her efforts.

Linda Kobrick, a catechist at Most Precious Blood Catholic Church, Oviedo and mother of a 20-year-old autistic son, agreed. She said the workshop provided much needed information that she can use not only in the classroom but at home as well.

“I am inspired to know that families can come to the Catholic Church for resources and help with their child who has a disability,” she said. “I have never seen anything like this. I am sure many will benefit from the information provided today.”