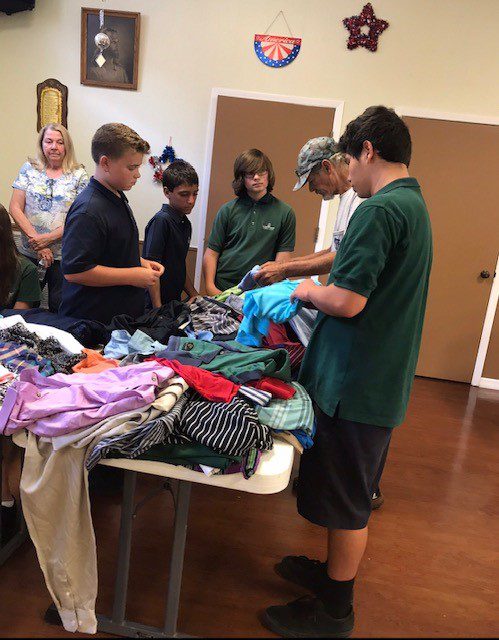 As August approached, excitement brewed for Finn J. as he entered eighth grade at Sacred Heart Catholic School in New Smyrna Beach. He was very excited to run his own Confirmation Service Project as he had already helped fellow students the year before, when he began sacramental preparation for Confirmation. As the eighth graders went to religion class, 30 students, including Finn, picked a service project to present to Mrs. Maria Bilodeau, their religion teacher. Finn’s project was approved right away.

Finn J. did not waste time. He talked to family, friends, teachers, and strangers with the help of his parents. The clothing drive unfolded before his eyes as clothes for men, women, and children started pouring in, first in Mrs. Bilodeau’s office; then more boxes in the Family Center; and eventually, his parents had to move their cars out of the garage so he could keep all of his collection there.

His first recipients were the homeless of New Smyrna Beach through the local soup kitchen that Sacred Heart supports, followed by multiple drop offs at F.R.O.G. (Fully Rely on God) Ministries on U.S. 1 in Edgewater. Shoes were added to his collection and more distributions followed. Finn J. successfully collected more than a thousand pieces of clothing, shoes, and belts. He said, “My commitment to clothe the naked will not end here.”  He promised to continue providing clothes to the poor and the homeless in high school, to give them dignity as fellow human beings and God’s children.