For Lieutenant Doug Goerke of the Orlando Police Department, reducing crime and maintaining the safety of Orlando’s neighborhoods is not only a career he’s invested 18 years of his life in, it’s also his ministry. 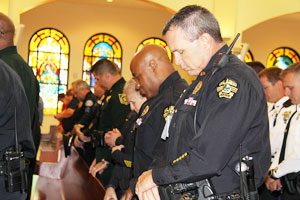 For Lieutenant Doug Goerke of the Orlando Police Department, reducing crime and maintaining the safety of Orlando’s neighborhoods is not only a career he’s invested 18 years of his life in, it’s also his ministry. When there is a car accident, a domestic disturbance in a neighborhood, or a natural disaster, Goerke along with the millions of sworn first responders throughout the country, come to the aid of people experiencing the worst day of their lives.

“I’m also a paramedic and last year at Washington D.C. we were able to do CPR on a fallen bagpiper. We were able to bring him back,” said Lieutenant Goerke. “The fact that we are able to help people every day, that’s just really the side of the job people don’t see.”

Goerke sat in the pews of St. James Cathedral with more than one hundred of his fellow men and women in uniform for the fourteenth annual Blue Mass to receive God’s blessing from Bishop John Noonan.  The Blue Mass is an opportunity for the community to join their voices in prayer for the safety of dedicated first responders, men and women in law enforcement, fire/rescue and public safety personnel, who put their lives in harm’s way for the good of our community. Goerke, his wife Jane and daughter Lauren are parishioners at Good Shepherd Parish in Orlando and have attended several Blue Masses throughout the years. For Goerke, his Catholic faith fortifies his trust in the Lord although serving in this capacity means risking his life.

“My faith is one of the most important things to me. I know that if the day comes when the Lord calls me home, everything will be taken care of,” said Lieutenant Goerke, whose eyes start to water as he pauses. “I am starting to tear up now because of my family, but if that’s what happens I am totally content with it because of my faith.”

Among the crowd dressed in a gray uniform is Sister Jean Riggs, S.F.C.C. who works as a chaplain with the Orange County Sheriff’s Office. Serving as a first responder for the past 16 years, Sr. Riggs has experienced great happiness in her ministry and also tragedy.

“My ministry as a chaplain is to ride around with the police officers, to speak with them, to counsel them, to go to the hospital when they’re shot. I have also given funeral services for those police officers who did not have a pastor,” said Sr. Riggs. “It is a beautiful ministry and I relish the opportunity to serve my fellow man as well as to serve God and the incredible people in law enforcement.”

September 29 also marks the feast of St. Michael the Archangel. During Bishop Noonan’s homily, children from several Catholic schools in attendance listened to Bishop as he spoke of the important gifts St. Michael and first responders have in common.

“St. Michael is always shown to have a shield and a sword in his hands. He is there to protect us,” said Bishop Noonan. “That’s what all these first responders do every day. They not only protect us for just one day, they work 24 hours a day, seven days a week, 365 days out of the year. Today we are asking God to bless them because they work very hard.”

For those like Lieutenant Goerke and Sr. Riggs, being a first responder is a privilege that demands great responsibility. It is the desire to safeguard people from danger. For these first responders, Blue Mass is a personal rededication for what they bravely continue to do for Central Florida.

“Blue Mass is the honoring of men and women who have put their lives on the line,” said Sr. Riggs. “It is a way we as law enforcement personnel and the community can come together to honor and pray for their souls.”