This year marks the 40th anniversary of Catholic Relief Service (CRS) Rice Bowl, the largest and oldest Lenten program used by millions of Catholics across the United States known for its iconic and symbolic cardboard ‘rice bowl’. 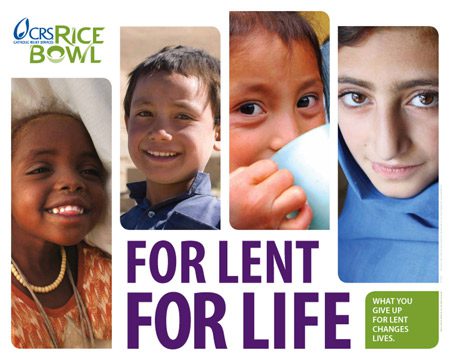 This year marks the 40th anniversary of Catholic Relief Service (CRS) Rice Bowl, the largest and oldest Lenten program used by millions of Catholics across the United States known for its iconic and symbolic cardboard ‘rice bowl’.  The program has evolved over multiple generations to become a tradition for Catholic families, parishes and religious educators.  Since its inception, millions of Catholics have contributed alms totaling $250 million to support efforts that fight poverty and hunger in dioceses across the U.S. and overseas.

“When we step back and consider that this paper rice bowl has made it possible to give real, life-saving assistance to so many, we see the power the 40 days of Lent have produced over the last four decades,” said Joan Rosenhauer, executive vice president of U.S. Operations for Catholic Relief Services (CRS).  “It’s the right time to step forward and fill each Rice Bowl with $40 and make a lasting change for those who need our help.”

Pope Francis has captured the world’s attention to the plight of hunger and poverty around the world. He said, “the scandal that millions of people suffer from hunger must not paralyze us, but push each and every one of us to act: singles, families, communities, institutions, governments, to eliminate this injustice.” People looking for a way to respond to this call will find CRS Rice Bowl is a proven and robust response.

For people like Thomas Awiapo from Ghana, the power of CRS Rice Bowl is quite tangible.  His destiny was altered as a young and hungry orphan – who lost two brothers to starvation – when he was welcomed into a school where lunch, funded through CRS Rice Bowl, was served. “You can call me the poster child for CRS Rice Bowl but we’d be closer to the truth if you called my children your poster children.  They have never experienced hunger in their lifetime, and today they attend university, high school and secondary schools without missing a beat.”

Begun in 1975 in Allentown, Pennsylvania as a response to the famine in the African Sahel region, the idea took hold and was adopted by the U.S. Bishops as a national response to hunger around the world. A year later, the initiative became an official program of CRS as “Operation Rice Bowl”.  Known today as ‘CRS Rice Bowl,’ the program uses donations to support CRS’ humanitarian programs in 93 countries overseas, providing life-saving assistance and hope to impoverished and vulnerable communities. Twenty-five percent of the total contributions remain in the dioceses where they were given and often fund food pantries, community gardens and outreach to vulnerable populations in the U.S.

CRS Rice Bowl materials are available in English and Spanish in print, on the web and through the mobile app.  To donate and to learn more about CRS Rice Bowl visit crsricebowl.org or download the app from the iTune or Google Play stores.

Catholic Relief Services is the official international humanitarian agency of the Catholic community in the United States. The agency alleviates suffering and provides assistance to people in need in 93 countries, without regard to race, religion or nationality. For more information, visit www.crs.org or www.crsespanol.org and follow Catholic Relief Services on social media: Facebook, Twitter at @CatholicRelief and @CRSnews, Google+, Pinterest and YouTube.