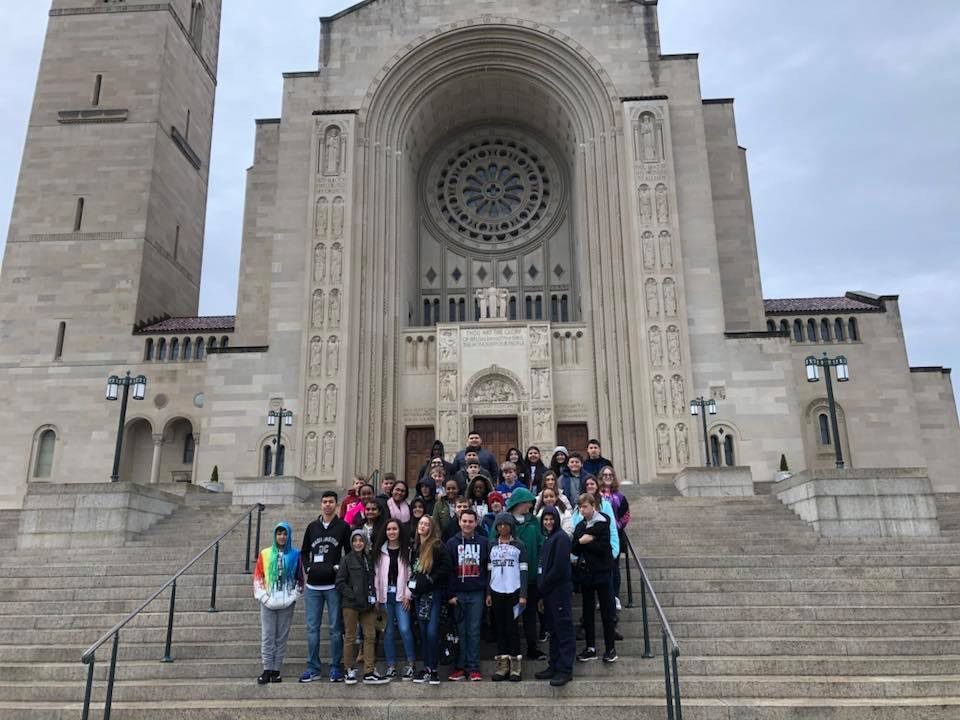 On February 25, 2018, the seventh and eighth-graders, three faculty members, as well as Father Jeremiah Payne, pastor of Saint Joseph Catholic School in Palm Bay, went to the Basilica of the National Shrine of the Immaculate Conception in Washington D.C. This was one of the stops in their four-day, Washington D.C. trip. Every other year the classes take the trip to visit sites relating to what they have learned. The excursion takes the opportunity to share about the Catholic faith while visiting the shrine to attend Sunday Mass and to receive a guided tour.

When the group initially arrived at the front of the basilica, amazement set in over its immense size. “The appearance of the basilica was astonishing and extraordinary!” exclaimed Veronica, an eighth grade student on the trip.

Students, teachers, and chaperones continued to the Lower Crypt Church where Mass was going to be held, settled into the pews, and Mass began. Afterward, the group proceeded to tour the Great Upper Church first and then went into the Lower Crypt once again. Many sites and exhibits within the basilica were explored. For instance, several shrines dedicated to the saints were visited. Students saw the same chairs past popes sat in while visiting. Many students said they felt closer to God while on the tour.

At the end of the tour, the group took pictures with a realistic cardboard cut-out of Pope Francis, lit a remembrance candle, and said a prayer before journeying to the next stop on their trip. Many agreed they made memories they will surely never forget.

Students and faculty left the basilica amazed by the beautiful art work and the church itself. Ms. Susan Horn, the eighth grade homeroom teacher and main chaperone was no exception. She first went to the basilica 20 years ago and became enthralled by the magnificence of the basilica. She remarked, “I think the basilica is the most beautiful man-made structure I have ever seen! Everybody who has a chance to go to the basilica should definitely go experience its beauty.”