Picture: Bishop Noonan blesses Bob Groppe, director of Divine Mercy Radio, during the blessing of their new studio on May 21. Dedicated to spreading the Good News, the station recently relocated its studio and plans to install three new radio towers that will increase their potential audience to 1.3 million listeners. 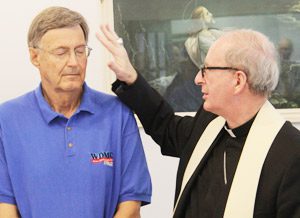 Picture: Bishop Noonan blesses Bob Groppe, director of Divine Mercy Radio, during the blessing of their new studio on May 21. Dedicated to spreading the Good News, the station recently relocated its studio and plans to install three new radio towers that will increase their potential audience to 1.3 million listeners.

“When Jesus preached to the crowds, the sea of Galilee acted as a carrier of Jesus’ voice” Groppe said. “They didn’t have radio, but he used airwaves so the people could hear him.”

In the same way, Divine Mercy Radio staff and volunteers have been using whatever resources were available to them to bring Catholic Radio to Brevard County. With a “fixer upper” frequency and station purchased in 2008, they has been inspiring and informing their audiences for seven years with content from EWTN and locally produced shows with area priests and parishioners. During that time, the station’s broadcasting power was reduced from five kilowatts to one kilowatt due to old radio towers and the studio itself contented with leaks and mold. Overcoming technological and building challenges, and with generous support from listeners, the station moved into a new home, which was blessed by Bishop John Noonan on May 21.

“I think Divine Mercy Radio Station is very important because we talk about spreading the good news, the Gospel of Jesus Christ,” said Bishop Noonan. “This is a way of sharing the word of God with not just our people in the pews but those who are everywhere in our community, helping them to understand their faith and helping them to come back to the Church.”

Among the people celebrating at the new studio’s blessing was Susan Marciello, a parishioner of Holy Name of Jesus parish. Marciello returned to the Catholic faith she grew up in after 16 years of attending non-denominational churches. She came back with a lot of questions.

“When I turned on Catholic radio, I thought ‘this is amazing! I love this,” she said. “I was immediately drawn to it and could see the value of it. It’s so important. It’s answered a lot of questions and made me want to know more.”

“I was going through a separation and divorce back in 2008, and I was introduced to the station through a friend,” Henry said. “I started to tune in, and I realized I had really been a head Catholic all my life. I started to become a heart Catholic. I was realizing what it meant to be a Catholic and why.”

In addition to the new studio space, Divine Mercy Radio has purchased land that will hold three new radio towers which will allow the station to boost its signal from one kilowatt to eight kilowatts, or an increase from 400,000 potential listeners to 1.3 million potential listeners.

“The Catholic Church is the fullness of truth,” said Groppe. “In the Ascension, we are called to go share that, to go forth and baptize the nations. All of this is just trying to be obedient to the Lord in our own way with our own abilities.”

To listen to Divine Mercy Radio, tune into 920 AM in Brevard County, or visit www.divinemercyradio.com to listen online.