Celebration was the theme of the evening at St. John the Baptist Catholic Church, Dunnellon, on Friday, October 10 as parishioners gathered for the first time in their newly renovated worship space. 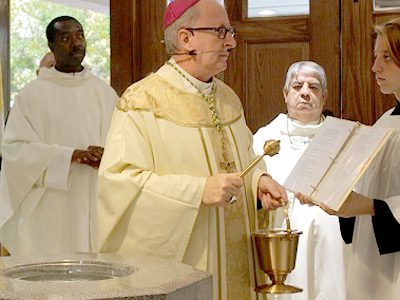 Celebration was the theme of the evening at St. John the Baptist Catholic Church, Dunnellon, on Friday, October 10 as parishioners gathered for the first time in their newly renovated worship space.

Bishop John Noonan was present to celebrate Mass and bless the church’s new interior, including the baptismal font, which was relocated to a more suitable place in the narthex.

In his homily, Bishop Noonan thanked the parishioners for the loving care they have shown to the Lord’s house.

The Bishop also drew comparisons to the Church’s patron, St. John the Baptist, describing the small but mission-driven community as a “voice in the wilderness, preparing the way for the Lord.”

Mass was celebrated in the parish center since June 9, when the parish began a major overhaul of the church that included new flooring, lighting, and pews. The existing pews were shipped to churches in Haiti, the home country of Father Jean Desir, Pastor of St. John the Baptist.

“Everything inside was affected in some way,” said Walter Wells, a parishioner who volunteered on the 12-member Alive in Christ team that spearheaded the renovations. “We replaced all the pews and all the seats, painted the interior walls, and rehabbed the restrooms with new counters and mirrors.”

“The new work brings in so much color,” he said. “This building is a celebration. Tonight we celebrate the transformation of a church into a very warm, very attractive place of worship.”

The project also included significant changes to the church narthex, including new tile and woodwork, much of it handmade by parishioner Joe Zack. In addition, a portion of the narthex ceiling was raised over the baptismal font to accentuate its significance.

Father Desir was visibly moved as he thanked his parishioners for the generous gifts of time, talent and treasure that made the renovations possible. “You can see the joy in my face. I am filled with joy tonight. This is the day the lord as made- let us rejoice in it!” he said.

Plans for the project took shape in 2010 with the launch of the Alive in Christ Campaign at the parish. Father Emmanuel Akalue, then Parochial Administrator of St. John the Baptist, and his parish leadership decided that the church, which had undergone few repairs since its construction nearly 30 years ago, needed a thorough renovation in order to meet the demands of future growth.

Parishioners responded by generously pledging more than $644,000 to Alive in Christ to help fund the effort.

Father Akalue, now serving as Parochial Administrator of Our Lady of Grace Catholic Church in Palm Bay, was present for the celebration and described his first glimpse of the new church interior as “exhilarating.”