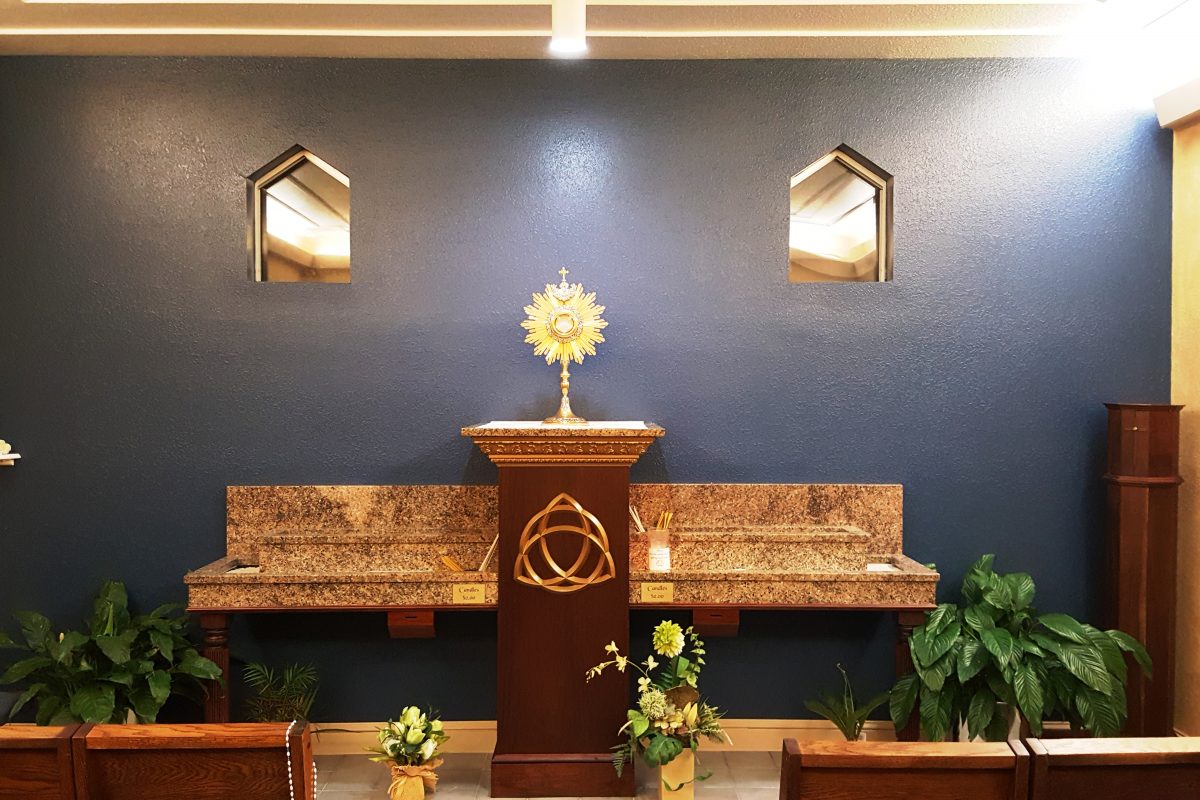 For 25 years, more than one thousand parishioners at Blessed Trinity Parish in Ocala have participated in Perpetual Adoration. On January 14-15, the anniversary was marked with a mission talk by Father Ken Geraci on what it means to be Catholic and the beauty of the Eucharist in Christian life.

The catalyst for its inception was the Eucharistic Congress of 1993 after which Saint Pope John Paul II prayed that each parish throughout the world would establish Eucharistic perpetual adoration, the practice of offering worship and praying to God before the Blessed Sacrament during its exposition. What makes it “perpetual” is that this prayerful vigil takes place 24 hours a day, seven days a week. The tradition began in the 1200s and was a popular form of devotion for 700 years until the reforms of the Second Vatican Council. Saint Pope John Paul II and Pope Benedict XVI reignited the practice.

In December of 1993, Father Martin Lucia, founder of the Apostolate for Perpetual Adoration in Michigan, spoke to parishioners at Blessed Trinity and inspired them to commit to spending one hour with the Lord to keep him company every minute of every day. Their inspiration led to the beginning of Eucharistic Perpetual Adoration on the Feast of the Baptism of the Lord on Jan. 7, 1993.

Karen Taylor was the first coordinator and remembers how it all began. “Father Patrick Sheedy (pastor) was working on establishing a stewardship parish and felt Perpetual Adoration should be the initial step,” she said. So Taylor began the arduous process of scheduling almost 1,000 parishioners who initially committed, and she agreed to adore at 2 a.m. “I found peace knowing I was doing the Lord’s work,” she recalled.  Although her time slot eventually changed, she was ever faithful until she fell and broke her hip 15 years later. “Anyone who sits before Jesus in the Blessed Sacrament will be changed,” she says. “Jesus is our everything! He listens to us! He deserves our worship and adoration!”

Mary Ann Haggerty, who coordinated the adorers for 10 years agreed. “Praying words is just one way of communicating with God,” she says. She adds that, because of Eucharistic Adoration, “I try to live better day to day. I am trying to realize what I do for others is carrying out the hour of adoration prayer.” Today, roughly 275 parishioners are regular adorers.

The parish celebrated its commitment to forever accompany Christ in the Eucharist with a special banquet, additional opportunities for the Sacrament of Reconciliation and Father Ken Geraci’s mission talk highlighting how to live in the Eucharist.

It is more than lay believers who support the age old devotion. Saint Mother Teresa of Kolkata said of the practice, “The time you spend with Jesus in the Blessed Sacrament is the best time you will spend on Earth. Each moment that you spend with Jesus will deepen your union with Him and make your soul everlasting and more glorious and beautiful in Heaven, and will help bring about everlasting peace on Earth.”

Current coordinator for the ministry, Carol Blackstock, has experienced that peace at the core of her being. She began as an adorer the week after it was made available at Blessed Trinity. For most of that time, she has spent time before the Lord in blessed silence from 4 a.m. to 5 a.m. “I love the solitude of that hour and selected it at the beginning because it didn’t take away any time from my family or job. Now that I am retired, I still want that hour. It is a very important part of my life that I would not want to lose.”

By Glenda Meekins of the Florida Catholic Staff