“Teaching and sharing our faith is a vital part of my priestly ministry,” said Father Alfredo Ortiz who celebrates 25 years of the priesthood this year. 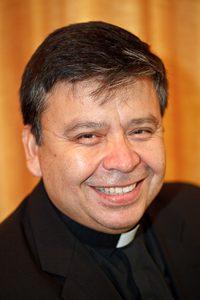 “Teaching and sharing our faith is a vital part of my priestly ministry,” said Father Alfredo Ortiz who celebrates 25 years of the priesthood this year.

Father Ortiz was born in Tampico Tamaulipas, Mexico. He discovered his calling to the priesthood during a weekend focused on vocations and entered the minor seminary at the age sixteen. On December 30, 1991 he was ordained a priest in the Diocese of Tuxpan Veracruz Mexico at the age of 26.

During the last 25 years, Father Ortiz’s ministry has provided many opportunities to share the love and mercy of God with those searching for Him and in need of His guiding light.

In 1995, Father Ortiz came to the Diocese of Orlando to serve the farmworker ministry where he helped celebrate Spanish Masses at area parishes including St. Patrick Parish in Mt. Dora, Blessed Sacrament Parish in Clermont and All Souls Parish in Sanford.

“I helped revive the faith of the immigrants and bring the message of salvation to people in search of God, walking with those in crisis when they felt distant from God. It’s a grace and blessing to provide fellowship and companionship to people when they need it most,” said Father Ortiz.

In addition to serving the farmworker community, Father Ortiz was the parochial vicar at St. Peter Parish in Deland, hosted a radio show at Buena Nueva FM for 14 years, and served as the spiritual director of the Spanish Charismatic Movement – a role that saw him speaking at conferences and retreats across the United States. He was also the administrator of St. Rose of Lima Parish in Poinciana where he served couples through the marriage renewal ministry and helped them communicate during difficult times.

Father Ortiz was incardinated in the Diocese of Orlando by Bishop Thomas Wenski on May 11, 2010. In 2013, Father Ortiz was appointed as the administrator of Misión San José in Pierson where he continues to serve the growing Hispanic community.

Father Ortiz said some of the greatest moments of his priesthood have been during his transitions from one parish to another and engaging with the youth.

“It’s overwhelming to see the outpouring of love when I am assigned to leave one parish for another, especially from children. It touches my heart to know that I have made a difference in a young mind and helped them grow in their faith. Their sincerity of heart and eagerness to learn is inspiring because they are the future of the Church,” said Father Ortiz.