After 25 years as a priest, Father Bautista admits that it can be a complicated life. There are so many roles to fill, but for the Colombian native, the heart of the ministry boils down to “the more we serve, the more we are happy.” 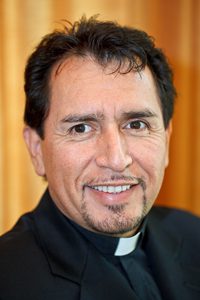 After 25 years as a priest, Father Bautista admits that it can be a complicated life. There are so many roles to fill, but for the Colombian native, the heart of the ministry boils down to “the more we serve, the more we are happy.”

“I have received so many blessings and I am graced to serve,” said the humble pastor of St. Catherine of Siena Parish in Kissimmee. “I know my life would be empty without the blessings my vocation as a priest has given me every day.”

“As a priest, I communicate with and have a life that exposes me to so many people of so many different cultures,” he continued. “To me, that is so enriching. Yes, there are sacrifices, but I do believe in my heart that God brought me to this life.”

Father Bautista first discerned his vocation while in Colombia where he entered the seminary. But after learning of an immersion program in the Diocese of Orlando that recruited Spanish-speaking priests to serve the Hispanic population, he moved to Florida, where he interviewed, was accepted to the program and later enrolled at St. John Vianney College Seminary in Miami. It was a leap of faith, and one that surprised his family, including his older brother who was a priest.

“He said to me, ‘Why there? What is there for you? You could be a priest in Colombia,’” recalled Father Bautista, who is one of six siblings. “But I told him, ‘Because I feel God is calling me there.’”

He continued studies at St. Vincent de Paul Regional Seminary in Boynton Beach, and later the American College of the Catholic University of Louvain in Belgium. Bishop Norbert Dorsey ordained him a priest Sept. 14, 1991.

Father Bautista has immersed himself both in the American culture and the different cultures of the various Hispanic communities he has served. He said there are not enough words of thanks he could offer the parishes he has served, including St. Paul in Daytona Beach, Our Lady of Lourdes in Melbourne, St. Francis of Assisi in Apopka, and now as pastor of St. Catherine for the past 13 years.

“The variety and the diversity of our communities create our richness. This country has progressed so much because of the variety all cultures offer,” Father Bautista said. “As the Church, we must have open arms for all who enter.”

When thinking of his vocation, Father Bautista constantly recalls the words, “Be not afraid.” They are words that challenge him to continue to develop mentally, spiritually and intellectually.

“The man who trusts in God is like a tree planted next to waters. We cannot be afraid. The graces will flow to the roots of the tree,” he said. “There are enough graces for everyone. I know because I have received so many blessings.”