If there is one word Father DeVera would use to describe his priesthood for the past 25 years, it would be “joy.” 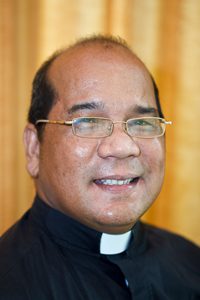 If there is one word Father DeVera would use to describe his priesthood for the past 25 years, it would be “joy.”

“I love being with the people. I love celebrating Mass. It gives me joy,” said Father DeVera, who serves as parochial administrator of St. Anthony Parish in Lakeland. “When I see people praying together as a community I think, ‘What a beautiful Church.’”

Father DeVera was born and raised in Manila, Philippines, and entered St. Joseph Regional Seminary in Jaro, Philippines, a seminary run by the Vincentian Fathers. Although he joined the order of Vincentians, he later went to a diocesan seminary and was ordained a priest of the Manila Archdiocese.

To fill a need for priests to serve Filipino populations in the United States, Father DeVera was sent to serve communities in Queens and Brooklyn, N.Y., some 15 years ago. He served as a chaplain at a Brooklyn hospital and was asked to be rector of pastoral care there.

“I learned a lot of medical terms,” Father DeVera recalled with a laugh. “That was something I never expected.”

Along with the culture shock, there was the weather shock. “It was too cold for me,” he said, adding he began to research assignments in warmer climates. That’s when he called the Diocese of Orlando and spoke with Father Richard Walsh. That phone call 12 years ago led to Father DeVera’s trip to the Sunshine State when then-Bishop Thomas Wenski assigned him to St. Francis of Assisi Parish in Apopka, where he worked with its pastor, Father Tim Labo.

Four years later, both priests transferred to Holy Redeemer Parish in Kissimmee. Father DeVera joked they were a “package deal,” with the two serving at two parishes together for eight years.

Last July, he began serving St. Anthony Parish in Lakeland, a “very promising community” the priest said he feels blessed to serve. Although the only priest at the community, besides retired priests who assist, he enjoys the community which includes a school.

Although it has been some three decades since he entered the novitiate for the Vincentian Fathers, Father DeVera said their motto of St. Vincent de Paul still inspires him as a priest. He believes his ministry is to bring the good news to the poor, and not just the materially deprived, but those who are lonely, miserable or mourning.

“The life of a priest isn’t always easy, but in general it is a wonderful life, a joyful life,” Father DeVera said.