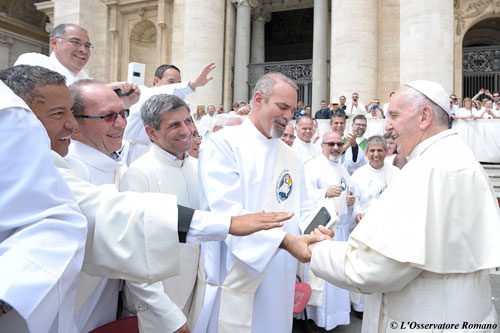 Year of Mercy in Review

The pope’s constant refrain during the Year of Mercy, was that no one is excluded from the mercy of God, who has shown his love for each person by sacrificing his son for the salvation of all. All can be forgiven, the pope taught over and over again, and once a person experiences just how loving and merciful God has been, the obligation is to reach out to others with that same love and mercy. The closing of the Holy Door in St. Peter’s Basilica Nov. 20 does not end this focus.

Celebrating a jubilee Mass Nov. 13 with the homeless and other people in precarious situations, Pope Francis prayed that as the Holy Doors in some 10,000 cathedrals, shrines and churches around the world were closed, God would open people’s eyes and hearts to the needs of others.

The Year of Mercy was an occasion to help people recognize how merciful God has been to them and, then, in effect, he commissioned all Catholics to be “missionaries of mercy.”

As we close 2016, the Florida Catholic is reminding our readers of the many blessed ways that we observed the Jubilee of Mercy in the Diocese of Orlando to allow people to experience in a deeper way, God’s infinite love and mercy.

Pope Francis declared a Jubilee of Mercy to remind all people that God faces the gravity of sin, with the fullness of mercy. In his letter on the Jubilee, he wrote that mercy will always be greater than sin, and no one can place limits on the love of God who is ever ready to forgive. He opened the Holy Door at St. Peter’s Basilica and urged all Dioceses to designate a Door of Mercy, for anyone to enter and experience the love of God who consoles, pardons, and instils hope.

Students at Resurrection Catholic School in Lakeland filled up containers of “mercy” stones to give away to visitors below a sign that read:  “Carry this stone to remember throughout this year that no one can be excluded from God’s mercy.” On Nov. 13, 2016, students wrote down the acts of mercy they performed during the year and replaced the stones in the containers with their slips of paper. These were then burned and “sent to heaven” during a prayer service to close the Year of Mercy.

Bishop John Noonan opened the Holy Door for the Diocese of Orlando at the Basilica of the National Shrine of Mary, Queen of the Universe with these words: “This is the Lord’s gate: let us enter through it and obtain mercy and forgiveness.” Parishes throughout the Diocese of Orlando also promoted grace and spiritual renewal by decorating their doors with images of mercy.

Diocese of Orlando started streaming Faith Fit Radio, an internet radio ministry that streams 24 hours a day and shared podcasts about faith. Mercy Minutes were streamed on the radio throughout the year which featured various people, including seminarians, speaking about what mercy means to them.  They can be heard at: https://soundcloud.com/faithfitradio/sets/mercy-minutes.

Catholic Charities of Central Florida presented the “40 Ways to Mercy” calendar for Lent with ideas for Corporal and Spiritual works of Mercy.

Franciscan Third Order Regular Father Anthony Aarons concelebrated Mass with Pope Francis on Ash Wednesday at St. Peter Basilica in the Vatican and is commissioned as a Missionary of Mercy. Describing his mandate, he said, “Pope Francis wanted us to do two things in particular, to preach mercy and to be the face of mercy, especially in the Sacrament of Penance. We should, as Missionaries of Mercy, carry the penitent on our shoulders. We have to be like Jesus and carry those lost sheep on our shoulders.”

Parishes opened their doors for 24 hours during “24 Hours for the Lord so the faithful could encounter Jesus Christ anew in the Sacrament of Penance and Eucharistic Adoration.

Bishop Noonan designated the Morning Star Catholic School “Sisters’ House” as the diocesan Institution of Mercy, a permanent memorial to the Jubilee of Mercy. The house helps young adults with special needs to learn skills to become independent.

Construction was completed in early December and blessed on December 7, 2016.

The Basilica of St. Paul in Daytona Beach hosted a May Procession, an international celebration of Mary, the Queen of Mercy on the anniversary of the first apparition of Our Lady of Fatima.

May 5 and June 13 Prayer Vigil Comforted the Afflicted

Bishop John Noonan led two prayer services known as “Vigils to Dry Tears” to offer hope and consolation to people in need. The May 5 Vigil was held at Sts. Peter and Paul Catholic Church. The June 13 vigil was held at St. James Cathedral one day after the Pulse shooting tragedy in Orlando.

Twenty four deacons from the Diocese of Orlando participated in the Jubilee of Mercy for Deacons with Pope Francis at St. Peter’s Square. The event marked the first time ever a Pontiff invited members of the diaconate to Rome.

May 27, 2016 Stories Shared about Mercy and the Saints

The Florida Catholic began a multi-part series highlighting saints of mercy who blazed trails showing us the path to heaven with merciful hearts. The saints demonstrated works of mercy and depended on God’s love and grace to endure through difficult times.

Parishioners of St. Mary Magdalen Parish in Altamonte Springs held a Morning of Mercy where people could perform corporal and spiritual works of mercy to benefit local organizations and ministries such as Catholic Charities of Central Florida’s Pathways to Care and Refugee services and Prison Family Support Ministry.  Their goal was to complete 2,016 corporal works of mercy, one for each year since the birth of Christ. The works were set to be completed by September 4, the canonization of Saint Mother Teresa of Kolkata.

The Diocese of Orlando held the Ministry Formation Conference on Sept. 17 at Bishop Moore Catholic High School in Orlando with the theme, “Disciples of Mercy” and a focus on “missionary discipleship.”

The Diocese of Orlando Holy Door (also referred to as Door of Mercy) closed during the 9:30 am Mass at the Basilica of the National Shrine of Mary, Queen of the Universe. Thousands of pilgrims entered the Holy Door seeking conversion by crossing the threshold, and seeking the strength to embrace God’s mercy and dedicate themselves to being merciful with others as the Father has been with us. The prayer is that this desire will continue in the hearts of all people long after the close of the Jubilee of Mercy.