Father Nicholas King grew up in County Galway in West Ireland. His family belonged to a parish that fostered many religious vocations, including Father King and two of his sisters. 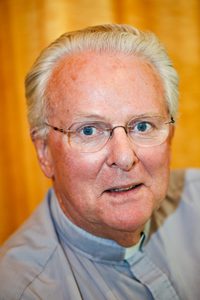 Father Nicholas King grew up in County Galway in West Ireland. His family belonged to a parish that fostered many religious vocations, including Father King and two of his sisters.

“The parish in which I was born produced over 70 priests and more than 100 religious sisters because of a powerful missionary tradition,” said Father King. “Their example and the high regard that loving service held in the community was a strong incentive to becoming a priest.”

During his discernment, Father King studied at St. Mary’s College, Galway; St. Patrick’s College, Thurles; and All Hallows College, Dublin all in Ireland. With plans to serve in Florida, Father King was ordained for the Diocese of St. Augustine, FL on June 19, 1966 by Bishop Joseph P. Dunne in Dublin. For Father King, this time period in his life filled him with exhilaration.

“Being in the seminary during Vatican Council II was very energizing. I was ordained 6 months after the council ended,” said Father King.

In the early years of his priesthood, Father King served at parishes throughout Central Florida, in what would become the Diocese of Orlando in 1968. In 1973, Father King was appointed Chancellor of the Diocese under Bishop William Borders. He took leave for a short time in 1977 to spend a year at the Catholic University of America in Washington, D.C., earning a master’s degree in Church Administration and studying canon law.

His studies were put to good use upon his return as he was appointed administrator at St. John Vianney Parish, St. Joseph Parish in Orlando, and St. Mary Magdalen Parish between 1976-1979. He would later join the Tribunal Office in 1982 as Defender of the Bond. That same year, Father King remembers one of his most memorable missions as a priest; assisting in the Diocese of Orlando’s adoption of a sister diocese, San Juan de la Maguana in the Dominican Republic.

“Establishing the sister diocese relationship is one of my highlights,” said Father King, who believes strongly in bringing the Gospel and necessary resources to people in need.

In 1993, Bishop Norbert Dorsey appointed Father King pastor St. Mary’s Parish in Rockledge where he continues to serve today. Looking back on 50 years of faithful service, it brings him a gratifying sense of happiness.

“Ultimately, it is God who calls people to serve him in whatever capacity he decides,” said Father King. “Fortunately for us priests, he sustains us in our mission for which we have to be eternally grateful. What one learns after 50 years is trust in the promise.”