When Father Robert Brown thinks of his call to the priesthood, he visualizes himself as a moving vehicle of God’s mercy. 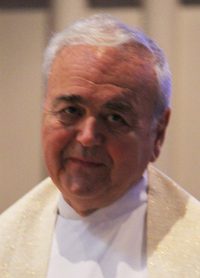 When Father Robert Brown thinks of his call to the priesthood, he visualizes himself as a moving vehicle of God’s mercy.

“It is a very special privilege from God to be called to His Sacrament of Priesthood, to become his vehicle on this journey in uniting Jesus with his people,” said Father Brown.

The pastor of St. Joseph Parish in Orlando has served in a variety of areas throughout his 50 years of service. Born in Berea, Ohio Father Brown would later move to Washington D.C. where he earned his undergraduate degree at the Catholic University of America.

During his continued studies and discernment, music became an important factor. Father Brown worked hard, ultimately receiving a M.A. in Music at Case Western University in Cleveland. With school completed, he was ordained to the priesthood on May 21, 1966 in the Diocese of Steubenville, Ohio.

In 1974 Father Brown was incarnated in the Diocese of Orlando and was appointed parochial vicar of St. Mary Parish, Rockledge. He also served at the Basilica of St. Paul Daytona Beach in 1980, St. John Vianney Parish Orlando in 1984 and has been serving at St. Joseph Parish in Orlando since 1987.

Throughout his vocation, music continued to be an important God given talent that he shared across the Diocese in the 80s. He conducted several concerts, including a renaissance music festival of an 80 musician ensemble at the Basilica of St. Paul in 1980, directed a choir of religious sisters for the renewal of vows by women religious at St. Mary Magdalen parish, Altamonte Springs in 1981, and formed an Ecumenical Concert Choir to perform a Latin Mass at the Basilica of St. Paul in 1983. Brown says music is a glorious triumph of sound beautifully organized to reflect the glory of God. He also notes how the Sacraments are the glue between Christ and his people.

“We are all very privileged to be united with Christ through His Sacraments, beginning with Baptism, Penance, First Communion, Confirmation, Anointing of the Sick, and also Marriage,” said Father Brown.

Father Brown is honored and humbled by the welcoming Spirit throughout his 50 years of priestly service. He accounts all his good work to following in Jesus’ footsteps.

“Uniting Jesus’ people in the spirituality of His Mass and all His Sacraments is crucial. Without His priesthood, this could not happen,” said Father Brown.

Father Brown will enter his next phase of ministry during his upcoming retirement, beginning May 23, 2016.