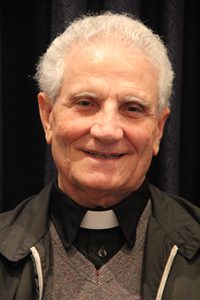 Father Zammit recalled his boyhood in Malta where he was very active at the youth center. While there Father George Preca, took him “under his wing.” While the young man liked the idea of a priestly vocation, the lack of job opportunities had him working as an apprentice at the dockyard by the naval base at the age of 15.

While at the base he went to the nearby chancery to gain advice from Father Preca. “I asked him, should I go to the dockyard or the seminary? Give me a few words of advice.’ He said, ‘Listen. You go the dockyard now. If God wants you to be a priest, he will call you from the dockyard when you are ready.’”

The young man was ready in just a few years. In 1956, he joined the Maltese Missionary Society of St. Paul where he made his novitiate and earned a degree in philosophy. He was then sent to Australia to finish his theology degree at Corpus Christi College in Melbourne, Australia.

Father Zammit was ordained July 23, 1966, at St. Patrick’s Cathedral in Melbourne, Australia. He served in both Australia and in Ontario, Canada, before entering the United States in 1972. For one year he served the Diocese of Camden, N.J., and then came to the Diocese of Orlando in 1973. He became an American citizen in 1975 and was incardinated in the Orlando Diocese in 1976.

“My role was not to be the pastor, but to help (staff) before a pastor would arrive,” Father Zammit recalled. Every parish I went, the first thing I did was try to identify any problems and encourage them in things that were going well. It was a way to offer a smoother transition for an incoming pastor.”

During that time he served St. Paul in Leesburg, Blessed Trinity in Orlando, St. Rose of Lima in

For the last 12 years, Father Zammit has assisted at three parishes: Our Lady of Lourdes in Daytona Beach, Prince of Peace in Ormond Beach and St. Peter in DeLand, where he now lives full time to help its pastor, Father Tom Connery, and its budding community.

He never strove to be a pastor himself he said, because by nature he is not a leader. But the priest who can communicate in Arabic, Syrian, Maltese, Italian, English and Spanish enjoys helping others “in what needs to be done.”

“I thank God for the priesthood and the people I serve who are so wonderful. I’m blessed to serve the people of God.”