Although born in North Tarrytown, N.Y., Father Fucheck is practically a native Floridian. 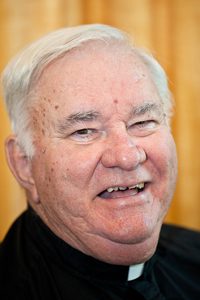 Although born in North Tarrytown, N.Y., Father Fucheck is practically a native Floridian. One of seven children, he moved to Florida with his family when he was 10 to the rural areas of Pasco and Hernando counties. Close by was then-Saint Leo College. He went to St. Leo Preparatory for high school there and joined the monastery in the abbey to become a Benedictine monk. He served as a teacher, but was also approached by the abbot to serve as a coach.

“He came up to me and said, ‘You played college football so you could coach soccer,” Father Fucheck recalled with a laugh.

Three years later, Father Fucheck felt a pull toward parish ministry and pursued it to become a diocesan priest. At that time, the St. Augustine Diocese encompassed the area, so it was Archbishop Joseph Hurley of St. Augustine who ordained him in 1966.

Instead of being ordained at the cathedral in St. Augustine, the young Benedictine requested his ordination take place in the small St. Mary Church in Masarytown. It wasn’t the easiest of sales pitches. But to him, it was not just his ordination, but a celebration for the local Catholics and the Benedictines who served nearby.

“My mother in Masarytown was getting calls from her friends and neighbors who were Lutherans and Baptists. They told her, ‘Bobby is our priest too.’ She invited the whole town,” Father Fucheck recalled fondly, adding that some 500 people attended the reception. “It truly was a community celebration and that is what touched me. I have always felt when you have the opportunity to gather people and celebrate community, that is hopefully what the priesthood is all about.”

Father Fucheck’s first assignment was at St. Mary Magdalen Parish in Altamonte Springs and then St. James in Orlando. The Orlando Diocese was created in 1968, and Father Fucheck stayed in the diocese serving at St. Peter Parish in DeLand and later at the Chancery offices in Orlando. Along with his services at the parish, Father Fucheck has also ministered in Marriage Encounter and Cursillo, and has served as pro-life director.

During his eight-year tenure at Our Lady of Lourdes in Melbourne, Father Fucheck oversaw the

construction of a new church building. Then he made another move to become pastor of St. Timothy Parish in Lady Lake, which also served the ever-increasing community of The Villages. Father Fucheck estimated there are some 40,000 Catholics, who are served by three area parishes — St. Timothy, St. Mark the Evangelist in Summerfield and St. Vincent de Paul in Wildwood.

Before he retired six years ago, he built a parish at St. Timothy too. He still remains active at the parish, joking he is “semi-quarterly retired.”

“All in all, my priesthood has been wonderful,” Father Fucheck said. “I have been living here in The Villages for 22 years — the longest in my life. This is home for me.”