A hurricane of blessings 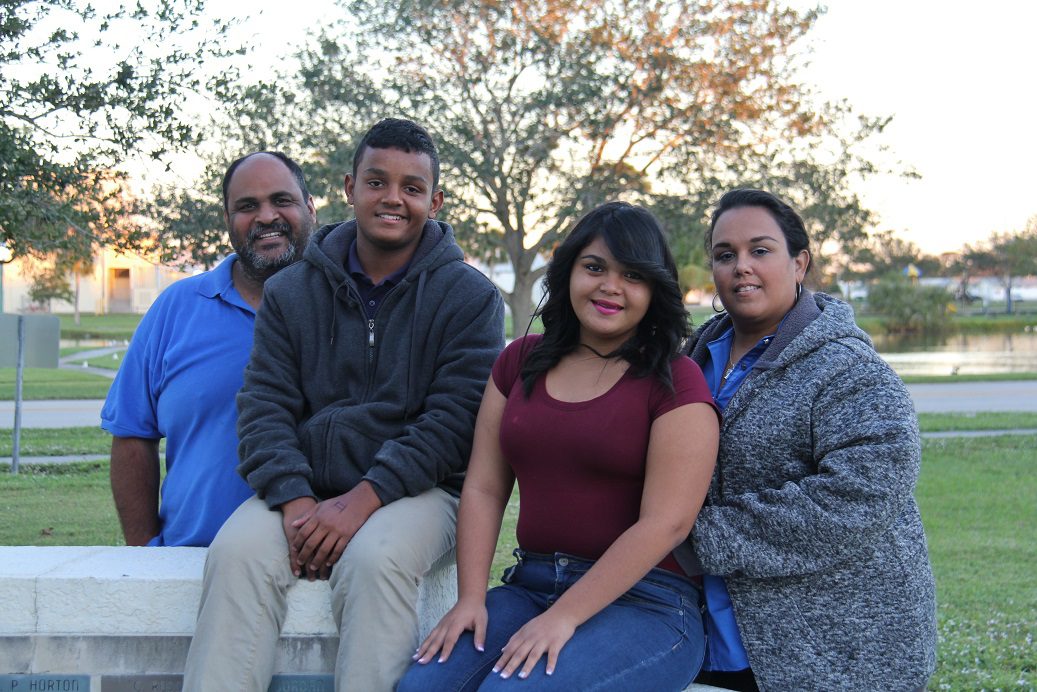 By Glenda Meekins of the Florida Catholic staff – December 14, 2017
The family’s last name was omitted to protect minor children.

“I had 10 minutes to make a decision,” recalled Glicer Marie of her decision to send her family to the U.S. after Hurricanes Irma and Maria swept through their hometown of Bayamón, Puerto Rico. Her family in Florida could see the magnitude of what had happened and began efforts to get her family off the island. Her aunt was able to procure humanitarian flights, but they had to decide quickly. “I sat the kids down and explained everything to them.” The decision came on the heels of a stressful three years of unemployment for her husband, Andrés. The couple diligently prayed to the Virgin Mary. Her answer came in two hurricanes and the kindness of numerous witnesses of faith whose generosity served as Eucharist to his soul, as Christ to his family.

“My mother-in-law has a great Marian devotion and told me stories of how the Virgin Mary had granted her requests,” Andrés explained. “So, I sat before the painting of the Virgin Mary that we have at home and said, ‘Please give me an opportunity to carry my family forward; to provide for them economically so that I can make a holy place for you in our house, that is worthy of you as you deserve. Please don’t delay.’”

Soon after, he was offered a new job, but the hurricanes hit and left him without work once again. “I thought, ‘What do I do now? How do I pay the bills? Everything had come to a standstill in Puerto Rico. I thought, what happened?’ Two weeks later the opportunity to travel to Florida presented itself. I thought, okay. These are mysterious ways.”

Jesús, the couple’s 13-year-old son, remembers the tenuous moments. “I kept debating between staying and leaving. I knew I would miss my friends, but we thought about the future and decided to leave. If we stayed, we didn’t know what would happen in the months ahead. If we left, new doors would be open. Leaving mom at the airport was the most painful because we had never been separated.”

While Andrés had been praying, so had Glicer Marie. She had just begun her new job teaching when the hurricanes plowed through their island. All the schools closed. The couple had pondered the idea of leaving for the U.S. for several years due to the waning economy. Perhaps now was the time.

So Andrés went ahead with the children to seek employment while Glicer Marie remained working. Her family stayed with Carla Fernandez, Glicer Marie’s sister, a Spanish teacher at Our Lady of Lourdes Catholic School in Melbourne. The parish welcomed the family, providing for their every need. Father Karl Bergin, pastor of Our Lady of Lourdes Parish, immediately granted Jesús a scholarship to continue 7th grade. Andrea Marie, their 17-year-old daughter, joined her cousin at Heritage High School, and Joseph, the eldest, found work. Andrés was employed within the week.

“I was nervous about the first day of school,” said Jesús. “I took it a day at a time until I gained confidence. Now it’s great. Some students helped me out, translated some things, and showed me the ropes.” Jesús joined a local baseball team and says he has made several friends.

Glicer Marie worked another week before rejoining her family in Melbourne thanks to the help of her brother, Marcos, who secured a flight for her and their sister Ruth, with the help of his company. “It was hard for me to come like this, but it has been a joy to see how my family has responded,” said Glicer Marie. “I feel that God has taught me to say, ‘Here I am. Do your will.”

Shortly after she arrived, Glicer Marie was hired at Melbourne Central Catholic High School as a substitute teacher. “For me, this Christmas will be the first time in 20 years that the whole family is together,” she said. “Although we had tried to do this for years, God chose this moment for that to happen.”

Three months after the hurricanes, the family is finally feeling settled. They hope to have enough for a home in January. “We are thankful to God that we are alive,” says Gilcer Marie. What we lived through in Puerto Rico was not easy. We are also grateful because coming here has been a dream of ours and it’s finally reality. Above all, we are so extremely grateful to our family because they have truly gone above and beyond for us, and for MCC and the parish. We have been so loved. It’s something hard to put into words. My husband said he has never seen so many people united. Arriving here there were nothing but blessings.”