A storm of blessings 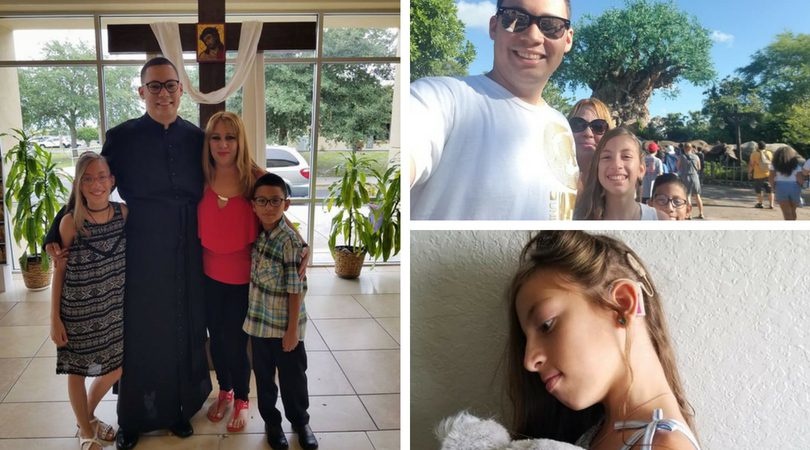 Orlando | Hurricane Maria brought destruction and devastation to much of Puerto Rico, but for one seminarian in the Diocese of Orlando the storm blew in wonderful blessings.

Angel Garcia, 23, moved to Orlando from the island five years ago with two goals – one, to be closer to his father and two, as he jokingly puts it “to run away from his call to the priesthood.” His mother, sister and brother remained in Puerto Rico, supporting Garcia from afar. It wasn’t long before he heard the Lord whispering again. “God has a big sense of humor and He followed me to Orlando,” he shared. “I would ask for signs and He would answer me.” So Garcia contacted the Vocations Office and entered the seminary.

Flash back to last September. Garcia’s mother, Ivette, learned she had pre-cancerous cells in her body that needed to be removed immediately. Her surgery was planned for the same day Hurricane Maria slammed Puerto Rico. The life-saving procedure was cancelled because the storm wiped out nearly all electricity across the island. Garcia knew he had to do something. He saved every penny he had, called his family and convinced them to move to Orlando.

Amazingly, they found an apartment quickly. Thanks to generous friends, people at Holy Redeemer Parish in Kissimmee, and Catholic Charities of Central Florida, the family’s home filled up with furniture and food. “Angel’s seminary classmates and their families gave us many things that I needed for the house,” said Ivette. “I had nothing. I am super grateful to God.”

The next mission was to find insurance and a doctor for Ivette. Despite challenges and several appointment cancellations, Garcia’s mother did eventually have surgery and not a moment too soon. “After they removed everything, they sent it to a lab and confirmed the cells had turned cancerous already,” he noted. “It was blessing because everything was a success. Her recovery went very well.” Today Ivette is cancer-free and laser-focused on her daughter, Melany.

Melany is a bubbly, brave 10-year old who lost her hearing at age 2 due to the side-effects of antibiotics given to her as a premature baby. Doctors in Puerto Rico fitted her with hearing aids. Each year Melany’s hearing deteriorated, but she never lost hope. She would even put her hand on family members’ throats to feel vibrations when they spoke and then mimic those movements herself for better pronunciation.

Once the family was settled in Orlando, they decided to consult specialists to see if anything could be done to restore Melany’s hearing. The initial diagnosis was not good. Doctors confirmed her situation would continue to worsen and regular hearing aids would not help much longer. They suggested the family consider cochlear implants, electronic medical devices that do the work of damaged parts of the inner ear to provide sound signals to the brain. Melany’s mother prayed about the very delicate, 3-hour procedure and eventually decided it was the best option.

Melany had surgery on her left ear July 17th, but it was nearly another month before doctors turned on the device. When the switch flipped on August 9th, it was a moment of true grace. “It was a beautiful experience to see her face light up while she heard our mother’s voice again after so many years,” shared Garcia. “Then I spoke to her and she heard my voice and she teared up… crying out of joy. It was such a blessing to see the power of God.”

Melany still cannot hear perfectly and will need surgery on her right ear over Christmas or Spring break, but her life continues to blossom here in Orlando. In Puerto Rico, she was the only hearing-impaired student in her class. Now she is enrolled in a school that caters to hearing-impaired children. On the first day, she bounced back home excitedly saying “Mommy, mommy there were kids like me there!” said Garcia.

Like most girls her age, Melany loves music. Before the implant she would put her hands on radio speakers to feel the beat and figure out what type of music was playing. Thanks to the implants, she can now dance freely. “The power of prayer is real,” said Garcia while thinking of his little sister. “The Lord answers our prayers and He does so at the right time. For many years, we prayed for a miracle and eight years later, Melany can hear again.”

This experience over the past year gives Garcia hope as he continues towards priesthood and focuses on the beauty of the Catholic Church. “We are truly one body in Christ, a big family. When my family arrived after the hurricane, a lot of people started moving and donating things to help us and honestly we never felt alone,” he said. Garcia hopes to be ordained for the Diocese of Orlando in the next five years. He is enrolled at St. Vincent de Paul Regional Seminary in Boynton Beach. Meanwhile, Ivette is looking for a job while counting her blessings. “Angel tells me, ‘Mom, you’re super blessed because they did your surgery fast –  Melany’s too. She can hear better already.’”

Little by little, the prayerful family is making Orlando home and they continue to praise God every step of the way. This story is proof that sometimes from bad things, good things happen,” insisted Garcia. “If it wasn’t for Hurricane Maria, my family wouldn’t be in Florida and my mother and Melany wouldn’t have had surgery.”

By Jennifer Drow, Special to the Florida Catholic – August 29, 2018