Adoption is an “Answered Prayer” for Two Local Families

It was the hardest decision of Melanie’s life. Should she choose to parent her child and raise him without any money or support or should she make an adoption plan? 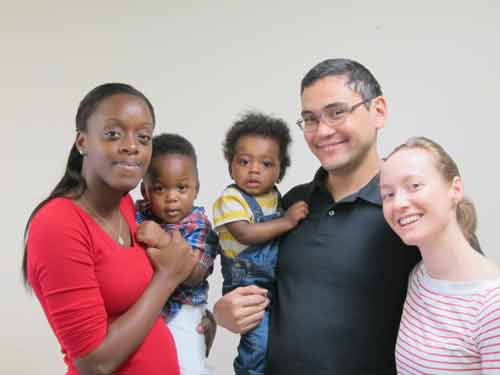 Editors Note: Last names have been withheld to protect the privacy of the families.

It was the hardest decision of Melanie’s life. Should she choose to parent her child and raise him without any money or support or should she make an adoption plan?

After much prayer and deliberation, the 22-year-old single mother chose to do what she thought was best for her son – give him to a loving family, who would be able to provide him with the life he deserved.

“I know for a fact he’s going to go to school and be smart and intelligent and very successful. There’s no doubt about that.” said Melanie, who had already fallen in love with her son before he was born.

Melanie, who was already raising her two-year-old son, was unemployed and in an abusive situation. She was working on her education and only two classes away from earning her high school diploma when she found out she was pregnant. That’s when she came across Catholic Charities of Central Florida Adoption Services. She met with Leesa Elliott, a pregnancy and adoption counselor, who was able to provide her with guidance in making her decision.

“It’s an agonizing decision,” Elliott said. “We provide for their immediate needs and stabilize the situation so she (the mother) is able to think more clearly as she navigates the adoption process. We want to support women choosing life for their babies.”

The Catholic Charities Adoption Services primary mission is to provide information and services to women experiencing unexpected pregnancies and assist them with exploring an adoption or parenting plan. If the mothers choose to proceed with an adoption plan, Catholic Charities provides counseling before and after the baby is born. They help match them with their future child’s parents based on what they are looking for in a couple. They can also assist with material needs such as food, housing or medical services.

For Melanie, it was important that her child was placed with a family who couldn’t have children of their own and led a healthy lifestyle. She found that with Leslie and Sophia. The most important thing to her was that they were going to provide a healthy, happy home for her son. What was an agonizing decision for one mother turned into a blessing for a couple, who longed to have a child but were unsuccessful.

“It was a natural move (to adopt). We weren’t able to have biological children, and we prayed about it,” said Sophia, who had heard positive stories from others and had a local Catholic Charities office where they lived. “I loved the idea of working with Catholic Charities. They ask the birth mother, and it’s up to the birth mother to choose (a family). I really liked that.”

Leslie and Sophia, who just celebrated their first Mother’s Day with their 10-month-old son, Joseph, were there for the birth of their adopted son. Catholic Charities helped prepare them through a class that brought in birth mothers and adoptive parents to share their experiences. They also were counseled on trans-racial adoptions. Catholic Charities continues to provide services through mediated visits, adoption picnics and family get-togethers.

Melanie is still able to see her son through an open-adoption process, which gives mothers an opportunity to see their child after adoption placement. She also receives regular updates and photos.  She said she tries to respect the adoptive family’s privacy and has found the longer she goes between visits, the easier it gets.

She looks forward to the day when they will all go to the park for a play date and eventually to Disney World. For now, even though she still has hard days, she said she finds comfort that he is with a loving and supportive family. She believes adoption should always be an option women consider.