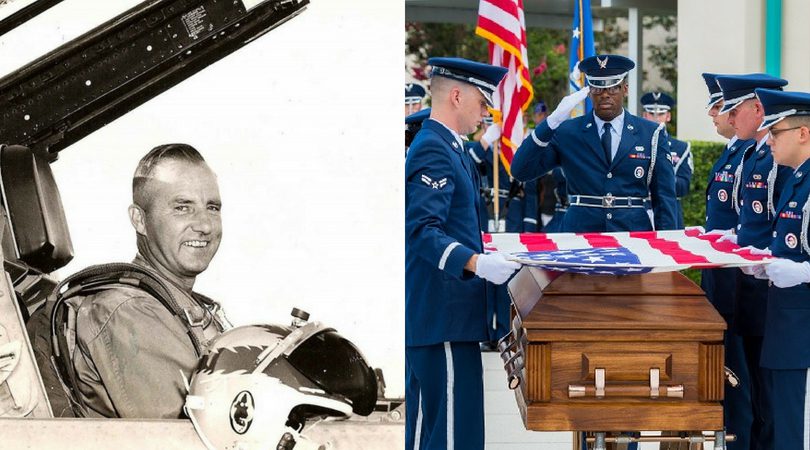 After volunteering to take another pilot’s place on a reconnaissance mission during the Vietnam War, Col. Peter Stewart, an F-4C Phantom II pilot, was shot down and declared missing in action in March of 1966.

Since the tragic disappearance, Stewart’s family has searched endlessly for any information regarding what happened that day.

As of April 2018, 52 years of questions and prayers were finally answered.

Stewart’s wife, Marnie, and their six children were notified that his remains, along with a St. Christopher medal, were discovered during an excavation in Vietnam by the Defense POW/MIA Accounting Agency. From there, his journey home to Winter Haven, Florida would begin.

“I prayed a lot over the years that this day would come,” said Marnie Stewart, now 94 years old. “And I prayed I’d still be here.”

After a flight from Hawaii to Tampa and a drive to Winter Haven, a formal full honors funeral service was held for Stewart at St. Matthew Catholic Church in Winter Haven, Florida, June 18, 2018, where he was represented by his wife and children, Beth, Bill, Maggie, Kandi, Susie and Jim, along with his grandchildren and great-grandchildren.

“My grandfather, though I never met him, is one of the people I admire most,” said Margaret Stewart. “His work ethic, devotion to our country and love for my grandmother and his family live on through his legacy. I am proud to be his granddaughter.”

“I think the experience has been surreal,” said Margaret. “For my family, it was well-deserved. Everyone is just so proud and honored to welcome him home. I think it’s going to bring a lot of peace for my family moving forward.”

During the Vietnam War, more than 58,000 Americans died and 1,700 are still unaccounted for. Even though these numbers are quite significant, the Stewart family can have peace knowing there is one more American who has returned home — their beloved husband, father, grandfather.

“Over the last few days, the amount of people who came to honor my father has been overwhelming,” said his son, Jim Stewart. “Today, almost 53 years later, I can still hear his voice and laugh and sometimes his presence. His legacy is more than just his six kids, but the Airmen he served with.”