‘I am here for them”
Father Robert Susann brings God’s presence to travelers, workers at Orlando International Airport

Walking through the Orlando International Airport, Father Robert Susann noticed an older woman glancing his way. He stopped to greet her and soon the pair was in a deep conversation. 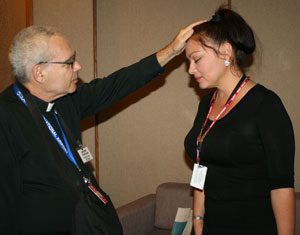 ‘I am here for them”
Father Robert Susann brings God’s presence to travelers, workers at Orlando International Airport

Walking through the Orlando International Airport, Father Robert Susann noticed an older woman glancing his way. He stopped to greet her and soon the pair was in a deep conversation. The woman told the airport chaplain that she had recently lost three important people in her life, including her husband, within an eight-month period. Father Susann offered her some words of encouragement and gave her his blessings, never once asking her religious background. The woman smiled and thanked him for taking time to visit with her.

“People in the airport are very venerable,” Father Susann said. “Many are in need. The most important role I have as chaplain of the airport is to be present, to be Christ to these people, whether it is a worker, a traveler, anyone.  This is ministry of the moment. It is all about being compassionate and giving people some time. Whether it is a handshake or a simple hello, whether it is confession or a blessing, I am here for them.”

Father Susann (pictured left) said every day is different at the airport. At any given time, he could be celebrating with a couple just returning from an anniversary cruise or helping employees make sense of a co-worker’s untimely death.

“I represent the airport community as a whole,” he said. “I am not here just for Catholics. I am a man of God. In this ministry, one has to be proactive. My job is to be out there with the people. I don’t have an office in the airport. I work the crowd, so I can get to know everybody. I love this work and serving all of God’s children in this capacity.”

“Father Bob is always a welcomed and needed presence,” said Ron Lewis, associate director of operations. “He serves all the needs for the entire airport community. There are a lot travelers who are apprehensive about traveling in the first place, so having someone like Father Bob available who can calm them, be compassionate, get them in the right frame of mind before they get on the airplane is very meaningful.”

Father Susann said the interfaith chapel, located in the Gates 1-59 corridor, offers a welcomed respite for many travelers and workers as well. Because airports can be so chaotic, the chapel is one place where people can come and be with God in peace.  Mass is celebrated at 8:15 a.m. and noon on Sundays.

Father Susann said he never imagined he would be serving God as an airport chaplain, but his work has brought him closer to his Father.

“God is more present in my life through the people I encounter, the ordinary person and the marginalized, through the stranger. God is so present. We are all from the same roots.

The Church is where the people are. It is that simple.”

During his address at the 15th World Seminar for Catholic Civil Aviation Chaplains and Chaplaincy, held in Rome in June, Pope Benedict XVI called on Catholic airport chaplains to be the catalysts to the Church’s New Evangelization.
“Dear friends, make sure that every person, of whatever nationality or social background, can find in you a welcoming heart, able to listen and understand,” he said. “Through your Christian and priestly lives, may everyone experience something of the love that comes from God, drawing them to a renewed and deeper relationship with Christ, who speaks without fail to those who open up to him trustfully, especially in prayer.”

“This is the human and spiritual environment in which you are called to proclaim the Good News with renewed vigor by your words, by your presence, by your example, and by the witness you bear,” the Pope continued. “Be assured that even in chance encounters, people are able to recognize a man of God and that often a small seed falling on good soil can bring forth abundant fruit.”