Alive in Christ Campaign Update: St. Mary of the Lakes

Water is a sign of life in the Church but when that water is rain leaking from the roof – that’s a very different story. 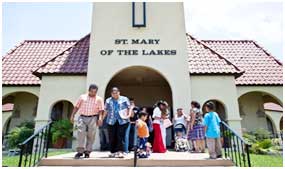 Water is a sign of life in the Church but when that water is rain leaking from the roof – that’s a very different story.

That’s what happened at St. Mary of the Lakes in Eustis and the parish finance committee was disheartened to learn it would cost $75,000 to replace the leaking roof.

Then in late 2008, the parish began to participate in the Alive in Christ Campaign for urgent needs of the parish and everyone agreed a new roof was a priority to secure the future of the parish.

The new roof was installed this past summer and Kurras says it feels good to have a new and secure roof over his head.

“We have a 20 year warranty on the roof, so we don’t have to worry about it for a while,” said Kurras.

Parishioners felt compelled to look beyond their own walls to see the needs of people outside their community as well and decided to include a mission church in Polk County as a beneficiary of their Alive in Christ Campaign.

“As Catholics, we share the love and compassion of Christ by reaching out to those in need – within and beyond our faith community,” said Monsignor Fernandez, who served as pastor of St. Mary of the Lakes for 18 years until his retirement on September 1.

In August, St. Mary of the Lakes provided $50,000 to Centro Guadalupano in Wahneta. The largely Hispanic mission is growing rapidly but the region was hit hard by the economic downturn.

“They try to raise money as best they can but they need support of other parishes,” said Monsignor Fernandez.

The Mission has a chapel that only seats about 400 but they need to double their space to accommodate the large number of farm and migrant workers.

“We’re extremely grateful for their generosity, for keeping us in mind and for their willingness to sacrifice,” said Father Norman Farland, administrator of the mission.