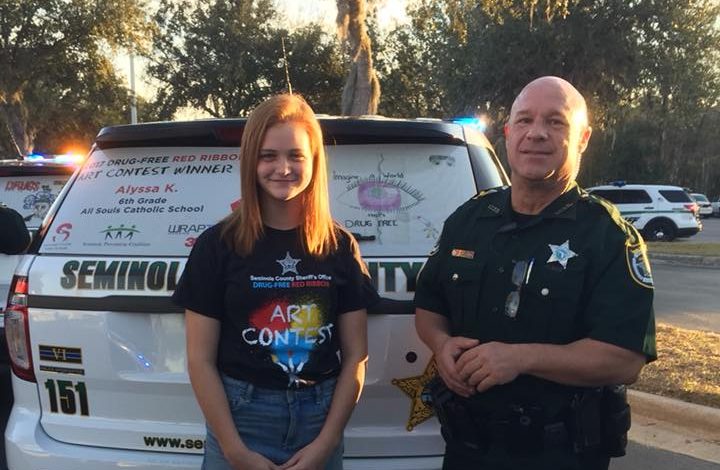 “When I saw a letter from the Sheriff’s office with my name on it, I got a little scared,” admitted Alyssa, a sixth-grade student at All Souls Catholic School in Sanford. “Then when I saw what was inside I got really excited!”

Alyssa and two other All Souls students, Davian in the sixth grade and Sophie in the eighth grade, all received letters informing them that they had winning entries in the Seminole County Sheriff’s Office annual Drug-Free Red Ribbon Art Contest. The contest invited students to design posters illustrating the importance of healthy drug-free living. For the first time, winning posters are being displayed on the back of school resource deputy’s patrol vehicles and will remain there until next year’s contest.

“Since they are on school resource cars, they are going to be seen in areas with students who will hopefully get the drug-free message,” said Kathleen Kiley, All Souls’ principal.

Kiley attended the awards ceremony with the students on January 24 at Winter Springs High School and described it as “very impressive.”

“There were 37 Seminole County school resource cars with the lights flashing, one for each winning entry, and all the artwork was covered in a black cloth. On the count of three all the students got to unveil their artwork,” Kiley said.

The ceremony continued with a pizza dinner and student recognition by the Sheriff’s Office, Seminole County School Superintendent Walt Griffin, and other local dignitaries. Davian received a special honor that night. His poster received second place in his grade level for the entire county. At the awards ceremony he was presented with a $75 gift card and certificate.

“I hope my poster helps prevent kids from taking drugs,” said Damian who’s artwork features the face of a young man surrounded by drugs and the headline, “Drugs on the Head Will Kill You Dead.”

Sophie’s colorful poster depicts a tombstone and the words, “Don’t Let Drugs Bury You” while Alyssa’s shows a large eye and the challenge to, “Imagine a World Drug-Free.”

“This is a great opportunity for students to showcase their talents,” said Kiley. “We are very excited to have three students from our school win. It was a banner year for All Souls!”