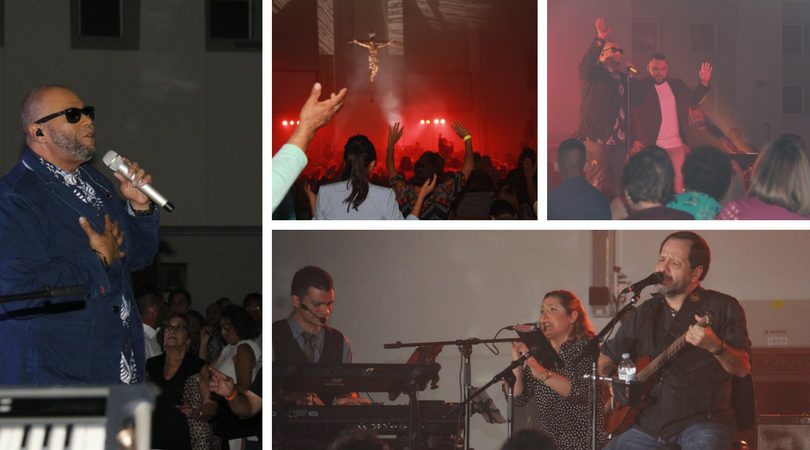 By Glenda Meekins of the Florida Catholic Staff – October 25, 2017

To celebrate its 30th anniversary, St. Isaac Jogues parish in Orlando invited famed Latin-American musicians Jon Carlo García and Martín Valverde to the stage for a one-night concert, Oct. 20. Parishioners and Christian music fans from the region came to enjoy two varied presentations of the Gospel message, affected by their uniquely lived experience.

First to take the stage was Dominican born Jon Carlo García, known for his upbeat rhythms which have inspired youth since he took to the stage in the early 1990s. Jon Carlo shared his testimony of conversion. After serving a three-year prison term as a youth, his father asked him to attend a retreat. He did so reluctantly and said, “There, the Lord was waiting for me and wooed me through the music. I fell in love with the choir that was singing and I accepted Christ because I felt loved like no one had ever loved me.” His message to those gathered was that God is always present and waiting for his children.

Valverde took to the stage next sharing his journey to faith through stories and song. After his sister had an encounter with Christ and their mother was healed of cancer, Valverde said he could not explain what was happening to him. He had studied music, but God did not ask him to evangelize through his music until years later. “What happened to us (he and García) is not that we chose Christian music, but that we had an encounter with Jesus,” said Valverde. And that encounter was evident in their message.

The crowd cheered and applauded as Valverde spoke particularly to the Puerto Rican families in the audience and the immigrants when he said, “You are in a foreign land, but know that you are here because God has planned it and has a purpose for you in this place, in this time. There is hope when we place our hope in God.”

Magaly Hernandez was in the crowd. A parishioner at St. Isaac Jogues for 29 years, she came to hear the music and the stories. Hernandez, who has shared a significant part of her life with the St. Isaac Jogues community, remembered her wedding, her parents’ celebration of life after they passed, her grandchildren’s Sacraments and the numerous ministries in which she and her husband participated. She said she came, despite recovering from knee surgery, to hear the musicians’ message and they did not disappoint her.

In an interview prior to the concert, Valverde said, “The harvest is great and the laborers are few. Tonight, the friendship and love we have for one another will be a witness to others. We suspect that if I don’t reach someone, Jon will.” The duo closed singing “Nadie te ama como yo” or “No one loves me like you (Jesus)” in unison with the crowd, on their feet, praising the Lord for his many gifts.