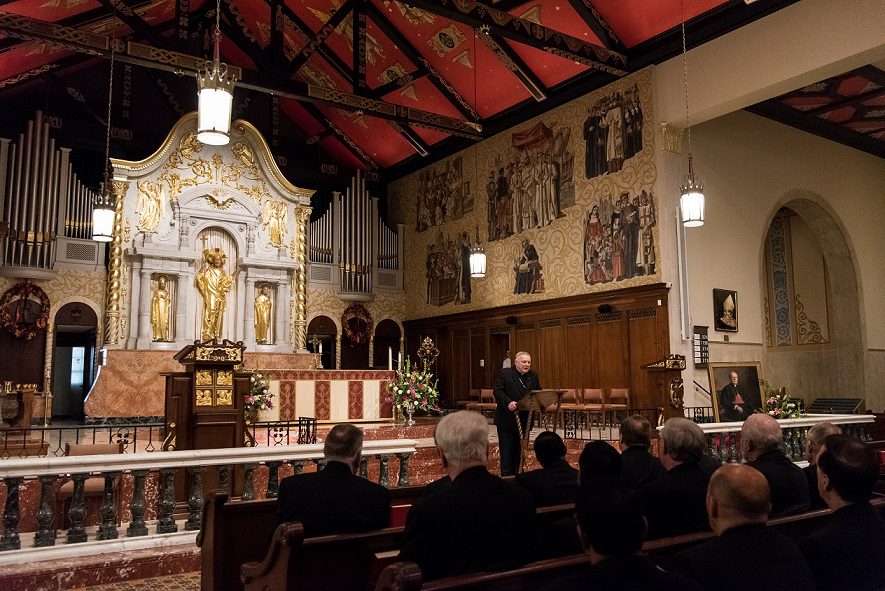 Archbishop Thomas Wenski of Miami speaks about Archbishop Hurley’s history and how his legacy changed the landscape of the local Church. (MARJORIE DURANTE | FC)

By Marjorie Durante of the Florida Catholic Staff – October 30, 2017

ST. AUGUSTINE | He was a man who foresaw future high schools, universities and seminaries as he purchased plots of land throughout the Sunshine State.

“Thanks to Archbishop (Joseph P.) Hurley, the land was there, diocesan organizations and structures, the priests were there,” said Miami’s Archbishop Thomas Wenski And the rest, as they say, is history.”

That history was celebrated in St. Augustine during a Memorial Mass and presentation in honor of St. Augustine’s sixth bishop who died 50 years to the day Oct. 30. Gathered at the Basilica Cathedral of St. Augustine, the Florida bishops, clergy and the community commemorated the visionary leader who made possible a rapid expansion of the Church.

“Today we come to remember and pay tribute to Archbishop Hurley, a historian in his own right. We come in prayer and gratitude for all his great achievements for the Church in Florida,” said Bishop John Noonan of Orlando during his homily at the memorial Mass.

Prior to the Mass, Archbishop Wenski spoke about Archbishop Hurley’s history and how his legacy changed the landscape of the local Church.

“He had both a prophetic vision and pragmatic organizational skills,” said Archbishop Wenski about Archbishop Hurley, who invested in real estate and properties in quantity, following a strategic way. “Without having the land, the growth of the Church here in Florida would have been hobbled from the start.”

After his return to the Diocese of St. Augustine, following a period of service as the Vatican’s Secretary of State under Pope Pius XI, Archbishop Hurley commissioned a sociological study that revealed the number of Catholics living in Florida, especially in the southern part of the state. At that time, most of Florida, save a portion of the Panhandle that was a part of the Mobile, Ala., Diocese, was under one diocese.

But the growing Catholic population, especially between the 1940s and the 1960s, required more than one bishop to take care of the faithful. Archbishop Hurley recruited priests from Ireland, Spain and the North to serve the rising community.

In the Diocese of Orlando, parishes like Good Shepherd in Orlando, Ascension in Melbourne, and Resurrection in Lakeland are built on land acquired by Archbishop Hurley. Also all nine Catholic schools in Brevard County owe their existence to him.

“Archbishop Hurley’s incredible legacy to every bishop and diocese in Florida is the properties he left for future development,” Bishop Noonan remarked. “He was a product of his generation, bold in his determination to prove his loyalty to God and country. Our prayers and wishes are that this great man will not be forgotten, but remembered forever.”