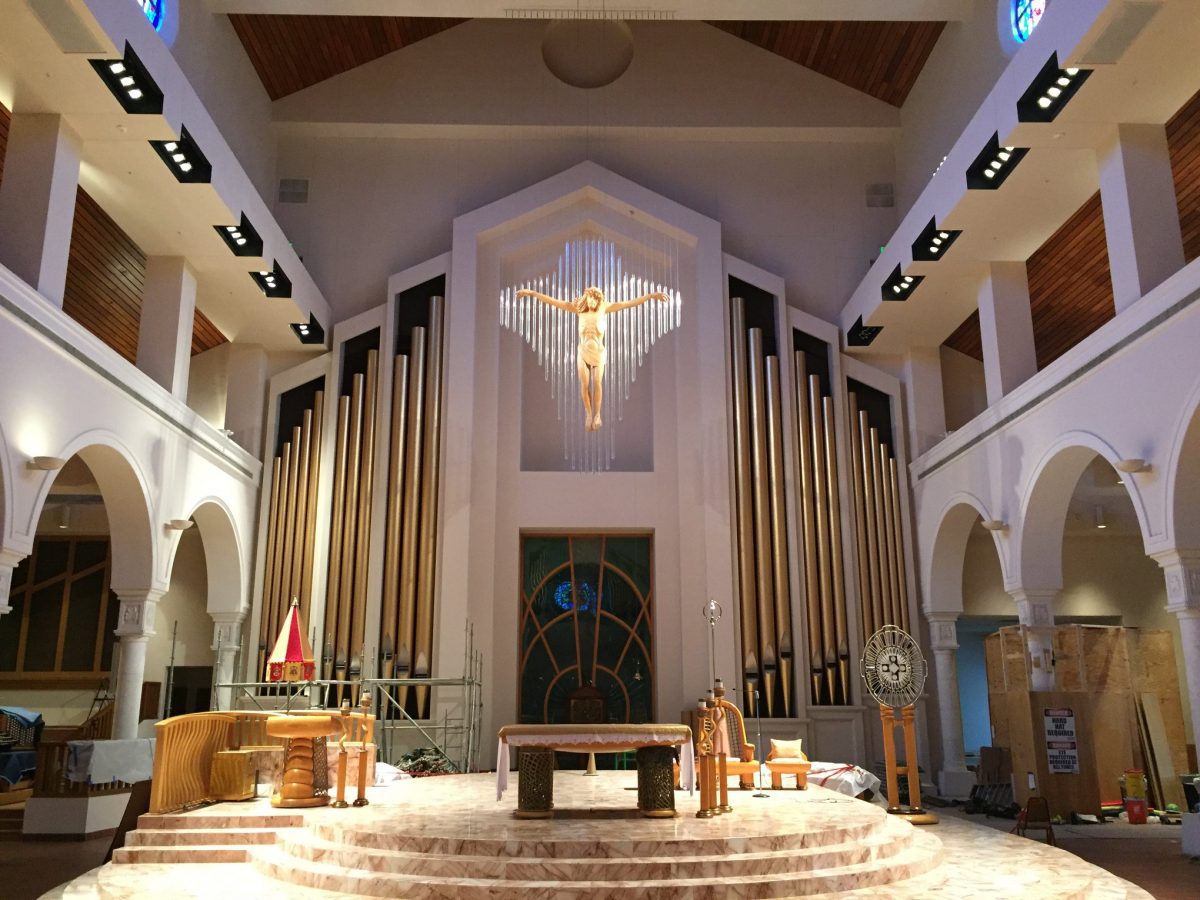 The Basilica of the National Shrine of Mary, Queen of the Universe completes its installation of 5,271 pipes, a longtime dream of founding pastor Monsignor Joseph Harte. Shown are 22 display pipes flanking the altar, the tallest in the set reaching 37 feet high and 18 inches in diameter. All pipes “speak” filling the basilica with brilliant sound. (WILLIAM PICHER)

ORLANDO  |  The Basilica of the National Shrine of Mary, Queen of the Universe in Orlando completed its pipe organ project and is preparing the grand unveiling this winter.

“This has been a long time coming,” said Dr. William Picher, director of music ministries and acting organist since 2001. Picher is referring to the aspirations set forth by Monsignor Joseph Harte many decades ago to provide religious solace for the thousands of tourists who visit Orlando each year. “It is a tourist ministry. The Shrine was built from donations.” When the architects built the Basilica, they left ample space for future additions. “They didn’t have to build any room outside of the building. The room [for the pipes] was already there.”

Helmed by Schoenstein & Co.—Custom Organ Builders, professionals with vast experience in the organ construction business since 1877, they devised the impressive musical instrument with pipes that tower along the walls of both the rear of the Basilica and its altar.

“You want to hear some of the specs?” Dr. Picher asked, eager to expound on the grandiose set piece he will play for the public later this year. In total, there are 5,271 pipes. Although the smallest pipe is roughly the size of a pencil, the largest pipe is 37 feet long, 18 inches in diameter and weighs 385 pounds. “Nobody is walking out of here with that,” he said, proudly noting its immense size.

Beyond the exterior pipes, rest hundreds of others all organized in detailed columns and rows and ranging in many sizes. The Gallery, Swell, Pedal, and Solo divisions house dozens of expertly crafted pipes, some that open and close to control the volume of each note. Every pipe throughout the Basilica has been painted to perfection and made with zinc, lead or tin. Each chamber was made with precision to ensure the music will flow evenly through the worship space.

Many of the reeds (pipes designed for expressing sound) are “hooded” or bent to reduce dust from settling inside and compromising the sound. Among the numerous reeds stands the Grand Harmonic Trumpet, the primary reed that has the power to take over the entire Basilica with its mighty resonance.

Set high above and in the middle of the Gallery division pipes, at the rear of the shrine, rests a large statue of the Risen Christ designed by Jerzy Kenar. The statue stands 14 feet high and weighs approximately 800 pounds and overlooks guests as they exit the Basilica.

Many of the rooms of the Basilica are closed due to the ongoing construction. Several art pieces have been covered up until the project’s completion, which nears its opening day in several weeks. However, on weekends, the Basilica does open for regular church Masses.

Dr. Picher is quite excited for his project to finally greet the Orlando public. “The scaffolding came down yesterday,” he said. “You can go to Facebook to see some of the pictures.” The pictures showcase the incredible detail and overwhelming presence the collection of massive pipes have throughout the Basilica.

The Orlando residents have been following the project very closely, as well. “Hundreds of people have donated,” Dr. Picher said. Supporters of the shrine who have given money towards the construction of the organ will be honored for their generosity. “There will be a plaque with their names, and they will be invited to the blessing of the Basilica in November.”

Funding assistance for the Basilica Organ was provided by The Catholic Foundation of Central Florida, a community philanthropic organization that partners with donors to support Diocesan schools, parishes, ministries and the social needs of Central Florida. The Foundation manages more than $50 million in investments that are socially screened to respect Catholic values, helping grow charitable giving so our Diocesan partners can meet their short- and long-term financial needs. For more information visit cfocf.org.

By Maurice Beaulieu of the Florida Catholic September 04, 2019