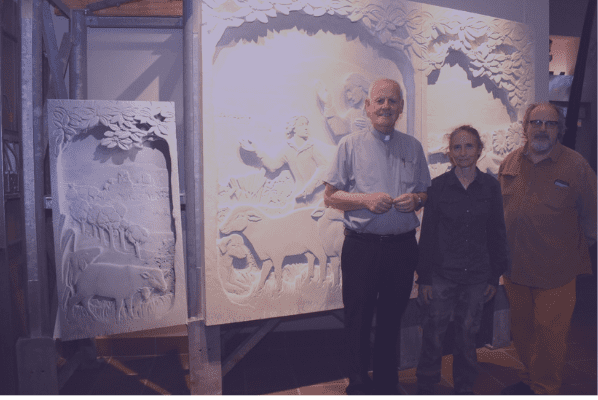 ORLANDO | Less than a week before Lent, three panels sculpted in Italy were installed at the Basilica of the National Shrine of Mary, Queen of the Universe in Orlando. Artists Jill Burkee and Giancarlo Biagi from Pietra Santa, the city where Michelangelo mined the stone for his work, came to assist with the panels’ placement and to put on the finishing touches.

The three panels depict the patron saint of priests, St. John Vianney. Rector of the basilica, Father Paul Henry, commissioned the panels so pilgrims awaiting the Sacrament of Reconciliation in the newly renovated confessionals can soak in the spiritual artwork before them. “It is a beautiful reflection piece that draws the penitent into the spirit of Christ which is compassion, forgiveness, and mercy,” said Father Henry.

He went on to explain the theme reflects a moment in the ministry of St. John Vianney when he arrived in his parish in Ars, France, 150 years ago. “He got lost in the countryside looking for this little village. He encounters a couple of shepherd boys,” said Father Henry. “In his distress, he said, ‘Show me the way to my church and I will show you the way to heaven.’” St. John Vianney was the new pastor and would become known for his dedication to the Sacrament of Reconciliation. To this day Ars is a place of great pilgrimage. “People go there by the thousands for retreats and reconciliation, just as they do here in the basilica of Mary, in Orlando,” Father Henry added.

The far right panel shows a shepherd boy in a “Christ-like posture,” said Burkee. The sheep stand in the forefront of the panels following common St. Vianney imagery, with the fields and mountains behind. “What you see is a very shallow relief, but it gives the impression of great depth,” she said. Images of the Eucharist, wheat and grapes are carefully hewn into the tableau.

Also seen are images of the laborers in the field with cattle, the people the saint found in Ars and “guided to heaven,” said Burkee. The far left panel tells small anecdotes shared by those who have visited Ars. They include people from the Basilica of the Shrine of Mary, Queen of the Universe, whose bell tower sits atop a hill on the left. Father Henry travelled to Italy with his brother, Father Paul, to bless the panels last year, as they were being created. The brothers are represented along the right side of the first panel, shown with a rooster, “Peter”, and a horse representing “Paul.”

The final anecdote depicts Monsignor Joseph Harte, first rector of the basilica, sitting upon a donkey. It recounts a story from his youth which tells of “a man that loved to speak with people,” while riding backward on his donkey because, as he would pass the people, he would have so much more time to speak with them. Because Monsignor Harte loved welcoming the pilgrims to the shrine, he is pictured on the donkey. “I think that represents the feeling of what this shrine represents, the love for people and the love for God,” said Burkee.

By Glenda Meekins of the Florida Catholic – March 4, 2019