Being the Good Samaritan to the critically ill 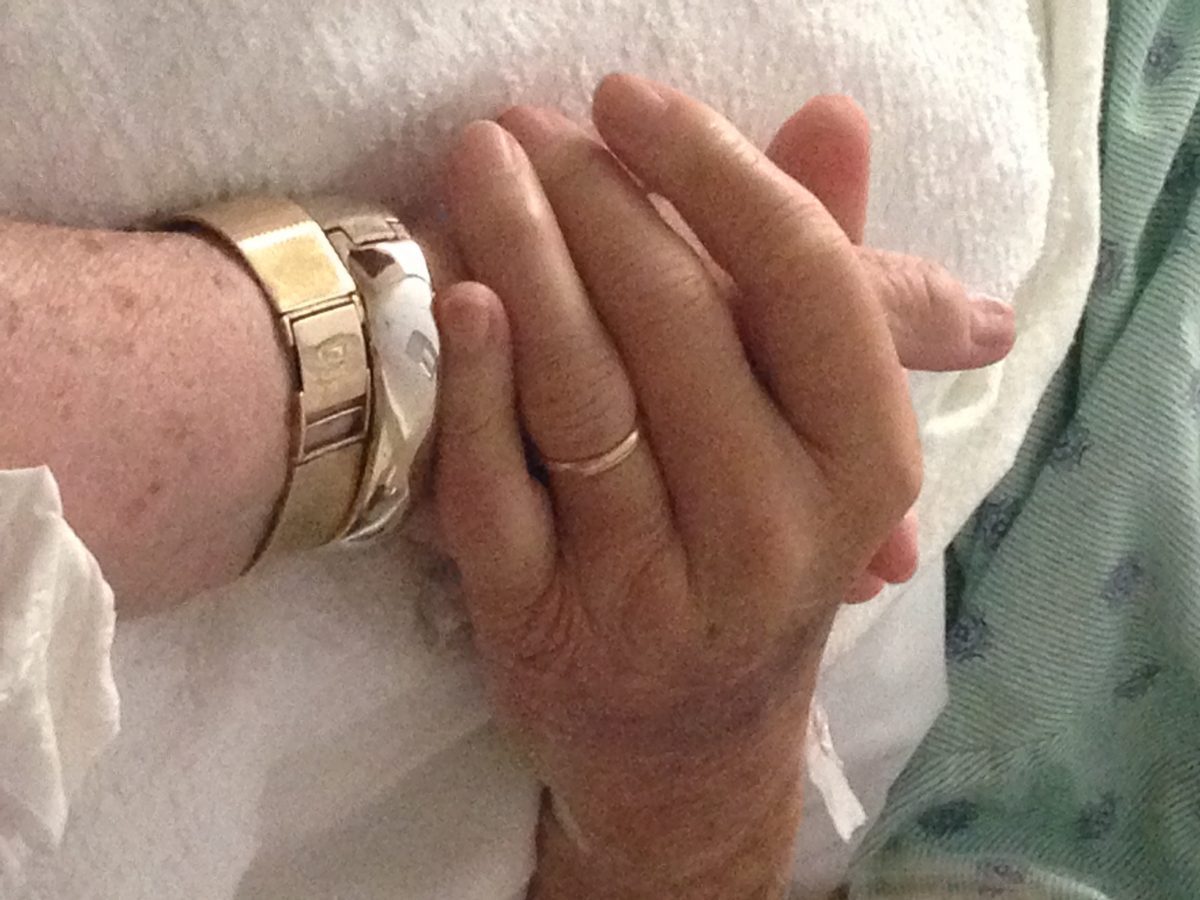 ORLANDO | Ten days after his Ordination to the priesthood, Father Martin Nguyen received a call. Dressed in a t-shirt and shorts, on his way to take his mother to a doctor’s appointment, he made time to visit a family in the hospital. Their 5-month-old daughter was dying from a brain tumor. “The oil was still fresh on my hands (from Ordination),” he said. As the face of the Good Samaritan, he ministered to them.

In the recent letter, Samaritanus bonus, published Sept. 22, 2020 – the Congregation for the Doctrine of the Faith addresses “the care of persons in the critical and terminal phases of life.” In light of efforts throughout the U.S. to promote laws that enable euthanasia or “death with dignity” laws, the Congregation clearly outlines the Church’s position and explains how the dying should be accompanied by compassionate priests, medical professionals and family.

Father Nguyen’s first experience in supporting a family during the final stages of their daughter’s life sheds light on the primacy of caring for our neighbor as did the Good Samaritan. He explained the couple just finalized adoption. “But both husband and wife chose to complete the adoption and journey with this child through her battle with the brain tumor.” He prayed with them and then completed the infant’s Sacraments of Initiation.

Celebrating the Sacrament of Confirmation at the child’s bedside, Father Nguyen recalled, “the same Chrism that was anointed on my hands was now being used on this child for Confirmation. For me it was very edifying. For the family, it was a very powerful experience.” He noted how happy and “appreciative” the parents were.  Over the next few days, he visited and accompanied the couple and grandmother in their grief. “It was a privilege to walk with the family.”  His service exemplifies the words of the Congregation, “Providing care for these children helps the parents to handle their grief and to regard this experience not just as a loss, but as a moment in the journey of love which they have travelled together with their child.”

His presence enabled the mother “to get to a place where she could say, ‘I’ve done everything for my daughter,” he said. According to the letter, it is that loving support that “signifies Jesus Christ who encounters man in need of salvation and cares for his wounds and suffering with ‘the oil of consolation and the wine of hope’. He is the physician of souls and bodies, ‘the faithful witness’ (Rev 3:14) of the divine salvific presence in the world.”

The letter goes on to explain, “Despite our best efforts, it is hard to recognize the profound value of human life when we see it in its weakness and fragility.” The Congregation notes how “every sick person has the need not only to be heard, but to understand that their interlocutor ‘knows’ what it means to feel alone, neglected, and tormented by the prospect of physical pain. Added to this is the suffering caused when society equates their value as persons to their quality of life and makes them feel like a burden to others.”

Bishop John Noonan noted Pope Francis’s words: “Even the weakest and most vulnerable, the sick, the old, the unborn and the poor are MASTERPIECES OF GOD’S CREATION, made in his own image, destined to live forever, and deserving of the utmost reverence and respect.” Bishop Noonan added, “As the Church ministers to the sick, she also ministers to Jesus. It is a shared moment of Christ’s peace as we anoint the sick; a privileged moment of healing the person’s heart and spirit in the Lord.”

Over the years, Father Nguyen has encountered those “absolutely terrified of dying”. He has been “thrown out of hospital rooms” by people fearing a priest’s presence meant the end of life was near. Others confided their desire to precipitate death if the pain became too great, for themselves and their family. Part III of the letter clearly emphasizes, “Whatever their physical or psychological condition, human persons always retain their original dignity as created in the image of God. They can live and grow in the divine splendor because they are called to exist in ‘the image and glory of God’ (1 Cor11:7; 2 Cor 3:18). Their dignity lies in this vocation.”

The Congregation explains the error is in our society’s view of what constitutes a “worthwhile” life. Those who limit worth to “the possession or lack of particular psychological or physical functions, or sometimes simply by the presence of psychological discomfort,” are blind to God’s presence within each of us. “According to this view, a life whose quality seems poor does not deserve to continue. Human life is thus no longer recognized as a value in itself.” The letter states this is the intrinsic problem. It notes, “Christ’s experience resonates with the sick who are often seen as a burden to society.”

As more states try to pass “dignity of death” or physician assisted suicide laws, Florida State Director of the Catholic Medical Association, Dr. Diane Gowski, states her strong agreement with the letter. “Physician assisted suicide is the antithesis of Hippocratic medicine (“Do No Harm”) which we physicians are called to practice. There is no morally acceptable role of participation,” she said. She advised members to invoke their “right to conscientious objection and take no part in it.”

“By following the example of the Good Samaritan, physicians caring for the dying allow them to encounter Jesus Christ. We have a sacred duty to provide basic ordinary care, consolation and hope as we accompany our end-of-life patients to their natural end. We can never intentionally speed up the dying process or cause death; that would be not only a grave disservice to our patient, but an evil action damaging to our own soul.”

Samaritan bonus points out that the “…the value of human life during times of illness, the meaning of suffering, and the significance of the interval preceding death are eclipsed” by enactment of such legislation.

Looking back almost 20 years, Father Nguyen emphasizes the point as he recounts the death of his grandmother. As a teenager, he witnessed her fight with cancer. There were no pain pills or morphine. “She endured the pain through sheer human will. When she was in pain, she would pray the rosary and rub her fingers against the beads.” He recalled, “When she died, her rosary beads were completely worn out. But even when she was on her deathbed and needed care for her basic needs, it didn’t mean grandma had any less dignity. If anything, it was a time for us to show the reverence, the love, the respect we had for her.”

Understanding that pain “is a personal matter,” he noted, “I don’t know if my grandma realized her pain had any meaning, but for me… I find my grandmother as an inspiration and witnessed the power of prayer and faith that got her through the worst of it.” It speaks directly to Samaritanus bonus which states, “Pain is existentially bearable only where there is hope.” It was her hope in Christ that helped her endure.

As for those who are not so sure of that hope, Father Nguyen agrees with the Congregation. “Our task is not to replace people’s conscience, but educate them on what the Church teaches.” He adds, “Is it not better to walk with them and help them realize the choice they are making is not correct while they still have the chance to reconcile with God? Sometimes by walking with them, you have a chance to change them for the better and walk them toward the truth. That’s what Jesus did on the Road to Emmaus.”

Fast forward a couple of years to another call to a nursing home. Father Nguyen arrived and the elderly woman was already unconscious. He told her he was there for the Sacrament of Anointing and to prepare her “to meet the good Lord.” There was no response. He proceeded and after the ritual, upon the final blessing, she turned, opened her eyes, smiled at him and died. “I thought, she clung to the last breath of her life waiting for the Sacrament.” It was then “I finally understood the significance of accompanying a person on their last day.”

To learn more about the Advance Medical Directive (Catholic Declaration on Life and Death) visit https://www.flacathconf.org/declaration-on-life-and-death.

By Glenda Meekins of the Florida Catholic, October 12, 2020