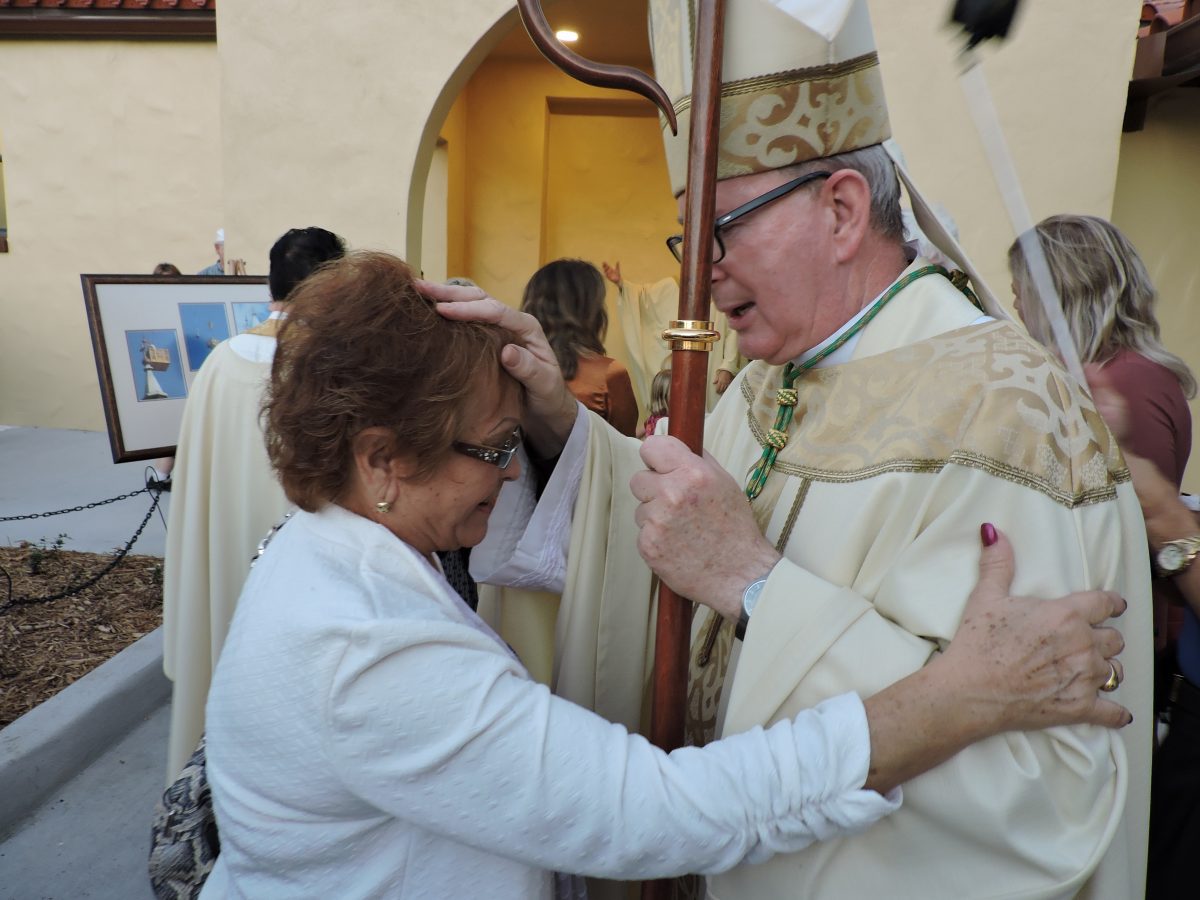 Bishop John Noonan blesses a parishioner at the blessing of the expansion of the Basilica of St. Paul vestibule. Part of the Alive in Christ Capital campaign that began in 2010, parishioners have eagerly anticipated the addition which will provide meeting space, a religious article shop, and handicap accessible restrooms, for six years. (RAFAEL GERENA | FC)

Gripping her walker for balance, Maria Wieclawek, 95, smiled as Bishop John Noonan sprinkled holy water across a statue of Pope John Paul II on Nov 19. Wieclawek, donated money for the statue as part of an Alive In Christ campaign that has expanded her parish, the Basilica of St. Paul in Daytona Beach. Bishop Noonan spent the November afternoon blessing the campus and embracing parishioners on a historic day for the Basilica marked by beautiful blue skies.

Wieclawek said the donation, “gives me a spiritual connection to my community.” A Basilica parishioner for 15 years, she was among more than 100 participants of the Mass and blessing. “This church and congregation is my family.”

Wieclawek is part of a wave of Catholic donors who in the past decade have pledged more than $150 million to the Alive in Christ campaign that has funded parish expansions, renovations and new-church construction throughout the Diocese of Orlando. At the Basilica of St. Paul, the campaign funded an expanded church vestibule with wheelchair-accessible restrooms, gift shop and “Damascus Room” for Bible study, children’s religion classes and social gatherings.

The Basilica’s expansion breathes new life into a parish community with roots stretching more than a century: its first Mass was celebrated in a log cabin in 1862 on South Ridgewood Avenue. In 2006, Pope Benedict XVI designated St. Paul Church as a Basilica, an honorific title bestowed on a church of historic and spiritual importance.

Since its founding, the parish has gone from serving 19th century German immigrants to today’s diverse congregation. With its tall, Spanish-tile domed roof, the Basilica of St. Paul is a spiritual citadel visible to many in Daytona Beach, a city where nearly one in three residents lives in poverty. A lot of people in the community “are searching for meaning,” said JoAnn Peterson, 76, a Basilica parishioner for more than 20 years. The Basilica’s new “Damascus Room” offers a place where local residents can “feel the closeness of God,” she said.

St. Peter Parish in Deland is also enjoying the fruit of its labor. The new 27,261-square-foot facility officially broke ground Sunday, Nov. 20 on the Feast of Christ the King. The community marked the occasion with a Mass celebrated by Bishop Noonan who later blessed the ground of the future Family Life Center alongside St. Peter’s pastor, Father Thomas Connery.

The Family Life Center is a $4.25-million facility that will include a gymnasium, youth room, classrooms, locker rooms, and a commercial kitchen and dining hall, relieving the existing burden on the Parish Hall which currently serves as a cafeteria. Completion is anticipated for late summer 2017.

The gym in the Family Life Center will enhance St. Peter Catholic School and will provide much needed meeting and event-space for the parish and community at large, including the parish’s Oktoberfest festival which is more than 60 years old.

Father Connery admitted that there were times he was afraid that the project would forever remain as only a sign on New York Ave. He said, “After all these years of hoping, dreaming and praying, it is finally going to be a reality.”

He went on to exclaim, “It’s more than a building. It is a statement of faith. It’s a picture of hope and a declaration of our optimism. It says that at St. Peter’s, we believe our best days lie ahead.” Father Connery recalled St. Peter’s first Mass in 1883 for five families. The parish would build its first church the following year to accommodate 60 people. Today, the parish celebrates the growth of God’s kingdom in Deland with almost 3,000 families.

“So this points to growth, not stagnation; to vibrancy, not complacency; forward thinking, not reminiscing,” he stated, noting the parish’s community impact and urging parishioners to continue growing and adapting. “We cannot rest on our laurels,” he said. “We must reach others and the family center gives us that option and opportunity. We will use it to draw others to share in our faith.”

In keeping with the parish’s legacy of giving, through its 2009 Alive in Christ campaign, parishioners raised $655,430 toward the new construction. Parishioner and philanthropist Edward Lacey of the Lacey Family Foundation also made a large donation, and coupled with the parishioners’ sacrificial giving, the project became a reality.