Bishop celebrates Filipino devotion to Our Lady of Antipolo 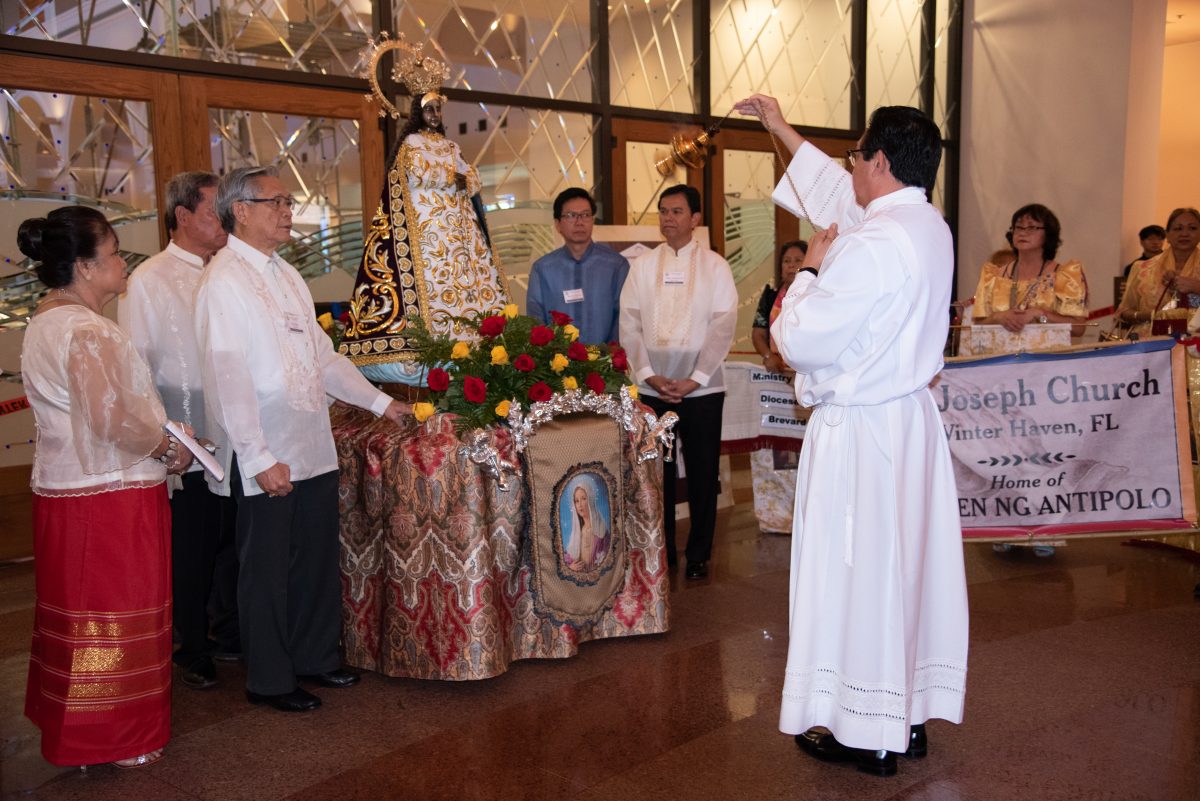 Father Kenny Aquino, director of the Filipino Ministry in the Diocese of Orlando, incenses the statue of Our Lady of Antipolo, brought from her home at St. Joseph Parish in Winter Haven. More than 700 members of the Filipino community participated in the rosary, procession and Mass at the Basilica of the National Shrine of Mary, Queen of the Universe in Orlando, in her honor. (GLENDA MEEKINS)

ORLANDO | Singing songs of praise in Tagalog, the Filipino community of the Diocese of Orlando culminated the novena to Our Lady of Antipolo with a rosary and Mass in her honor at the Basilica of the National Shrine of Mary, Queen of the Universe in Orlando. Bishop John Noonan concelebrated the Mass with many of the Filipino priests of the diocese.

“Your faith is an example and inspiration,” the bishop told those gathered July 27. “It is a reminder of the role Mary played in the life of Jesus. She brought us to her son and above all, she gave us the example of a mother who wants us to know her son. Allow Mary to bring your children to come to know the Lord. That is the greatest gift you can give your children.” As more than a dozen children came forward to place flowers at the feet of the statue of Our Lady, Father Raul Caga sang, “Mary, Bring Me to Jesus”, his own composition.

Also known as Our Lady of Peace and Good Voyage, Filipinos have revered her since the 16th century when Governor General Juan Niño de Tabora obtained her statue from a parish in Acapulco, Mexico. The statue traveled with him aboard a Spanish galleon, enabling a safe voyage and keeping the ship safe from pirate invasion. Recognizing her protection, she accompanied several other galleon ships over the years until her image came to rest in Antipolo, in the outskirts of metropolitan Manila. Each time people tried to relocate her, it is said that she would disappear, always returning to sit atop a tipolo tree. Thus her name, Our Lady of Antipolo. Today, the Filipino people make a pilgrimage to the site of her shrine in Antipolo.

Laura Jain came to the United States in 1976, but still has fond memories of those trips. “Every year I remember my father always told us it would be a pilgrimage. We were made to dress up and go to the Mass there. We wore starched clothes and it was very hot. My parents encouraged the eight of us children. We were brought up to be devoted to the Blessed Mother.” Jain’s favorite memory was eating a special dessert called suman, a rice cake cooked in coconut milk and wrapped in banana leaves, traditionally shared after Mass. Today, Antipolo is a sprawling city, but then it was about an hour by car—many walked. This year, her hour-long drive from Winter Haven caused her to reminisce and reflect on her devotion.

She attended each night of the novena and Masses at her parish, St. Joseph’s in Winter Haven, leading up to the basilica Mass. Jain noted, “It really transformed me more than I thought it would. It made me think of religious commitment. You are committed to work… to social stuff… to family birthdays. Every night I said to myself, one night at a time.” She said attending each night made her more devoted to the Blessed Mother.

This was the first year that the novena was celebrated in one place, with the Filipino priests coming from all ends of the diocese to pray and celebrate the Mass. Father Kenny Aquino, director of the Filipino Ministry in the diocese said, “With the agreement between the pastor of St. Joseph,  Father Jimson Varghese and the Filipino ministry, the parish was designated as the home for the image of Our Lady of Antipolo (Our Lady of Peace and Good Voyage) – under the care of the Filipino community of Winter Haven.” The figure of Our Lady of Antipolo, brought by Father Peter Puntal 15 years ago, resides in an alcove in St. Joseph’s chapel.

While St. Joseph’s is the pilgrimage site of Our Lady of Antipolo within the diocese, Jain notes her image is also above the entrance of the shrine. “She has brought us back together in a specific place, just like in the Philippines,” she said. “There, everyone always wanted to move her, but she always came back to her shrine. It’s been very beautiful that she is honored here, for the pilgrims, for the tourists.”

Father Glenn Lopez, parochial vicar of Most Precious Blood Parish in Oviedo, spoke about the role of Mary and her relationship to the Filipino people in his homily. “Our Lady of Antipolo is very applicable to us Filipinos because we are scattered all over the place. We are divided into 7,100 islands – and that is in high tide,” he quipped. “We’re separated by waters and traveled a lot. We love journeys. It’s just so appropriate for us that Our Blessed Mother provides that protection and guidance in our journey through life. The best way to know Jesus is through the Blessed Mother – Ad Jesum per Mariam (through Mary).”

By Glenda Meekins of the Florida Catholic August 05, 2019