Bishop-elect Parkes: How It All Started

The journey to become a priest for Father Gregory Parkes started with a decision to enter the seminary, which he made while working as a branch manager for a well-known bank in Tampa. 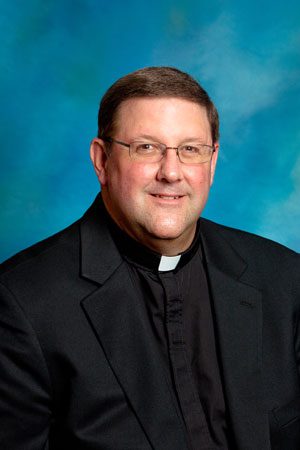 The journey to become a priest for Father Gregory Parkes started with a decision to enter the seminary, which he made while working as a branch manager for a well-known bank in Tampa.

“I began to think and discern how God was wanting me to spend my life,” Father Parkes said. “I realized that it was to serve him as a priest, and that he was extending that invitation to me.”

Born in Mineola, N.Y., Father Parkes was the middle of three children – all boys – in a devout Catholic household. He attended a Catholic elementary school in Massapequa, N.Y., and became an altar server and participated in youth group activities.

When he was getting ready to graduate from high school, Father Parkes wanted to go into hotel and restaurant management, and wanted to attend Florida State University in Tallahassee because of the school’s reputation in that industry. He established residency in Daytona Beach, and attended Daytona Beach Community College for two years, earning an associate’s degree. He moved to Tallahassee, and eventually changed his major to finance.

After receiving his degree from Florida State University in 1986, Father Parkes accepted a position in banking. Quickly, he moved up the ladder through a series of promotions, and his generosity and professionalism were noticeable by his clients. But, after several years in the industry, he said he felt unfulfilled. He began discerning his vocation to the priesthood, praying in front of the Blessed Sacrament.

He made an appointment with Father Richard Trout, then the director of vocations for the Diocese of Orlando, and entered St. Vincent de Paul Seminary in Boynton Beach in 1993, a year after his younger brother, Father Stephen Parkes, pastor at Annunciation Parish in Altamonte Springs, joined the seminary.

“I would say that part of my staff wasn’t surprised,” Father Parkes said when asked about the reaction of his employees. “In fact, most of my customers that I was serving at the time were not surprised. I would say overwhelmingly that the response was, ‘I’m not surprised, and I wish you could be my pastor someday.’”

Seeing Father Stephen in the seminary and his joy validated Father Parkes’ decision to become a priest.

“I think seeing how he was able to make the adjustment from his professional experience and how fulfilled and happy he was in the seminary, I saw it was a very positive sign and confirmation of my own calling,” Father Parkes said.

In 1996, Father Parkes was selected by then-Bishop Norbert Dorsey to continue his studies in Rome, at the Pontifical North American College, where he would study canon law. This would be the first of many assignments that would shape Father Parkes’ path to the Episcopacy.

Father Parkes was ordained June 26, 1999, and graduated from the Pontifical North American College in 2000 with a degree in canon law. His first assignment as parochial vicar was at Holy Family Catholic Church, where his finance degree helped tremendously in assisting with the $18 million for construction of a number of buildings.

In 2005, Father Parkes was named Chancellor of Canonical Affairs for the Diocese of Orlando, and on the same day named the parochial administrator for Corpus Christi Catholic Church, a new community, in Celebration.

“It was just surprise, something I never expected or anticipated,” Father Parkes said. “But I trusted that God would give me what I needed to fulfill my responsibilities as Chancellor, as well as what I would need to start a new parish in the Diocese.”

After seven years at Corpus Christi, he returns to northwest Florida, 16 years after graduating from Florida State University. He looks forward to returning to the Co-Cathedral of St. Thomas More – where he attended as a college student – and meeting the people in his new diocese.

“One of my first priorities is just to get out and meet the people and priests, to assess what the needs are,” Father Parkes said. “I’ll try to bring the love of Jesus Christ to the people and teach our faith to them in a way that is understandable and that can be applied to their daily life.”