On May 25, Bishop John Noonan ordained Father Lehnertz, along with Father Ivan OImo, Father Dominic Buckley, and Father George Nursey, to the Order of Priesthood. 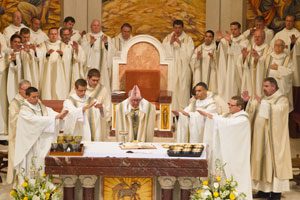 Father Benjamin Lehnertz was filled with emotion during the Mass that forever changed his life.

“I am not ashamed to say that the entire time that the priests were laying hands on my head I cried,” said Father Lehnertz. “It was one of the most intimate and beautiful and extraordinary moments of my life.  I felt the warm acceptance of being welcomed into a brotherhood and like I was being given the gifts of all of these men.”

On May 25, Bishop John Noonan ordained Father Lehnertz, along with Father Ivan OImo, Father Dominic Buckley, and Father George Nursey, to the Order of Priesthood.

Close to 1,800 people gathered at St. James Cathedral to rejoice in the priestly ordination of these four transitional deacons in the Diocese of Orlando. So many had gathered for the joyous occasion that the overflow of participants was directed to the cathedral social hall, where they were able to view and participate in the celebration via a live stream broadcast. The Ordination was also broadcast on the diocesan website as well.

“You are to be a priest for the people, to serve them, to nurture them, to shepherd them,” Bishop Noonan said to the newly ordained during his homily. “They are your flock. People want to see Jesus in you as priests. They want to see compassion, understanding, and self-sacrifice in your lives of obedience, chastity and generosity. They want to get a glimpse of the Good Shepherd who laid down his life for the people.” Preparing for the Sacrament of Holy Orders is a nine-year process of intellectual, spiritual, pastoral and human formation. Having received the sacrament, the four men are now preparing for their first priestly assignments as parochial vicars at their respective parishes, which they will begin in mid-June.

Father Olmo, a graduate of Blessed John XXIII National Seminary in Weston, Mass., will begin his priestly ministry at the Church of the Resurrection in Lakeland. He said it was difficult to put into words the emotions he was feeling as he begins his new journey of faith.

“God is so gracious and kind to allow me the opportunity to share in his profound love and to be able to express this love and share it through the celebration of the sacred Mass,” he said.

Father Nursey, who along with Father Lehnertz and Father Buckley graduated from St. Vincent de Paul Regional Seminary in Boyton Beach, said he, too, was overwhelmed with emotions.

“During the Ordination, I was looking at the mural on the wall of the Cathedral altar, where the apostles were receiving the Holy Spirit, and I realized that I was in that line, receiving the Holy Spirit,” he said. “I then looked over and saw Monsignor David Toups [Doctor of Sacred Theology and rector/president of St. Vincent de Paul] smile and nod at me as if he understood what I was thinking.”

During his homily, Bishop Noonan commended the new priests on answering God’s call. “You have listened to God’s Word,” he said. “You have prayed with God’s Word, and you have been strengthened by God’s Word. You are now willing to become followers of Jesus Christ, having grown in faith, hope and love.”

With 12 men from the diocese expected to be accepted to the seminary this year, Father Jorge Torres, director of vocations, encouraged the congregation, and especially those discerning a call to the priesthood and religious life, to be open to God’s plan for your vocation, that purpose in your life that will bring you joy and peace.

“Their yes is an example to each one of us, a challenge, a calling, an invitation that they invite us to say yes as well,” said Father Torres. “Joy is in the challenge to follow Christ. If you are feeling a call, this is the time to listen. Don’t doubt.”