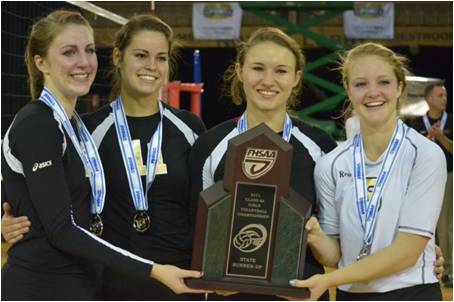 The team lost 3-1 against Tampa Berkeley Preparatory, which also gave Bishop Moore its only other loss during the 2011 season, in September. Bishop Moore was consistently ranked first in the state, and at one point was ranked as high as fourth nationally.

In front of nearly 1,000 local fans – students, parents and alumni alike – the Bishop Moore Hornets battled toe-to-toe with Berkeley’s Buccaneers, also a Top 10 ranked team nationally. During the initial match, the two fought evenly at first, but Berkeley pulled away to a 25-15 victory. The second match showcased a similar outcome, a 25-18 win by Berkeley.

However, the Hornets avenged those first two losses, scoring the first five points of the third match and winning 25-15. Berkeley Preparatory sealed its third consecutive state crown in the fourth match, though, going up 6-0 before winning 25-16.

For head coach Tanya Jarvis – a 2001 Bishop Moore Catholic High School graduate – and her team, it was another solid campaign. The team has compiled a record of 102-21 over the last four seasons, and ended 2011 with a 29-2 record.

“To get that national recognition speaks very highly of how hard they worked,” said Jarvis, who led Bishop Moore to state titles in 1999 and 2000. “We represent our school and each other. Our fans are amazing. We couldn’t be more proud to be a Bishop Moore Hornet.”

Though it was the last game for Bishop Moore Catholic High School seniors Alex Beecher, Anna Lausberg, Maura Mulligan and Brittany Rembert, three of them will play collegiately. Beecher will play at Georgia Southern University, Lausberg at Washington and Lee University and Rembert at Villanova University. All three signed national letters of intent earlier this month.

At the end of the game, the players huddled together, uniting and speaking to God. It is something the team does after each game.

“Prayer is very important to us,” Jarvis said. “It brings us back to realizing God has a plan for all of us. Win or lose, we are still one with Him. We’re very blessed and grateful.”