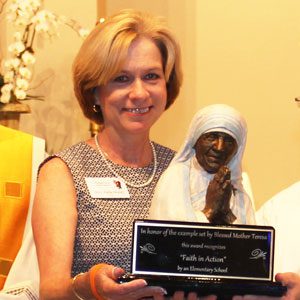 Students at Bishop Moore Catholic High School in Orlando and St. Margaret Mary Catholic School in Winter Park were awarded the annual Blessed Mother Teresa Award in recognition for service projects they completed during the 2012-2013 school year. The award is presented annually to two schools in the Diocese of Orlando that demonstrate the compassion and corporal works of mercy exemplified by Blessed Teresa of Kolkata.

Seventh and eighth graders at St. Margaret Mary visited the children of farm workers at the “Kids in Motion” Program at the Apopka Family Learning Center. The students developed friendships with the children, tutored them and provide them school supplies.

Bishop Moore senior Adrienne Youngpeter spearheaded the school’s effort to participate in the Million Meal Challenge Orlando. The students built a website that was ultimately used by international organizations sponsoring the event, made videos about world hunger, and spoke during liturgies and at diocesan middle schools promoting and encouraging others to take a stance against hunger and participate in the Million Meal Challenge.

Each school received a statue of Blessed Mother Teresa, which will remain on campus until next year’s winners are announced, a plaque to display permanently in its building, and $1,250 to give to their favorite charity.