During the laying on of hands, Bishop John Noonan invokes the Holy Spirit upon Father Nicholas Tocco who was ordained a priest on May 28 at St. James Cathedral, Orlando. Photo by Valeta Orlando.

The journey to priesthood for Father Nicholas Tocco ended on May 28 during his ordination Mass attended by close to 1,000 people. But in many ways, this is only the beginning. 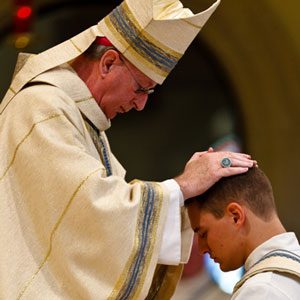 The journey to priesthood for Father Nicholas Tocco ended on May 28 during his ordination Mass attended by close to 1,000 people. But in many ways, this is only the beginning.

Left: During the laying on of hands, Bishop John Noonan invokes the Holy Spirit upon Father Nicholas Tocco who was ordained a priest on May 28 at St. James Cathedral, Orlando. Photo by Valeta Orlando.

In humility and trust, he has offered his life – all that he is and will be – completely to God. After his ordination to the priesthood, Father Tocco said he feels a deep sense of gratitude and responsibility.

“I feel enormous gratitude and joy to be surrounded by so much love and beauty of the Church, the gift of Church and priesthood fill me with gratitude,” he said after his ordination. “I also feel a strong sense of responsibility to serve God’s people and to be a good and holy priest.”

One of the highlights of the Ordination Mass was when Bishop Noonan quietly prayed while placing his hands on the head of Father Tocco who knelt before him.

“The most important moment is the laying on of hands from the bishop,” said Father Miguel Gonzalez, vocations director until May 31. “At that moment, when we see that, he has become a priest. It’s through the laying on of hands and the invocation of the Holy Spirit that we see that transformation taking place right before our very eyes,” he added.

Another significant part of the ordination Mass was when Father Tocco laid prostrate before the altar during the Litany of Supplication.

“The prostration on the floor is basically that surrendering, that dying to one’s self as we invoke the saints to intercede for him at that moment and to intercede for the Church as we continue to ask the Lord to bring more laborers to his vineyard,” added Father Gonzalez.

During the ordination Bishop Noonan spoke several times of how sacred this day is for our Church.

“This is a very sacred rite of the Church, the calling and ordaining of a man to the order of priesthood. Priesthood is not a right but a gift from God and so we thank God for blessing the Church of Orlando with this new priest,” said Bishop Noonan.

Describing Father Tocco’s role as a priest, Bishop Noonan said, “As priest you will exercise the office by celebrating the sacraments so that by word and example you will build up the people of God in Holiness. Therefore, carry out the ministry of Christ the Priest with constant joy and genuine love, attending not to your own concerns but to those of Jesus Christ.”

Bishop Noonan also thanked Father Tocco’s parents in a special way because he said, “It is from a family that truly the vocation is born. We thank you for your love and dedication and faithfulness to the Church and your example to your son.”

Father Tocco’s parents, Daniel and Mabel proudly and joyfully witnessed their son’s ordination from a front row pew in the cathedral. They brought up the Eucharistic gifts of bread and wine and received Father Tocco’s blessing immediately after he imparted his first blessing upon Bishop Noonan.

“I feel blessed in many, many ways. It’s been quite a journey,” said Daniel Tocco after the ordination.

Father Tocco celebrated his first Mass of Thanksgiving on May 29 at his home parish, Annunciation Catholic Church in Altamonte Springs.

At the start of Mass, he greeted the parish community with these words:

“Nothing I say can express the joy I feel to celebrate these Sacred Mysteries with you here today.”

Father Tocco begins his first priestly assignment in the Diocese of Orlando as associate pastor of St. James Cathedral on July 1.