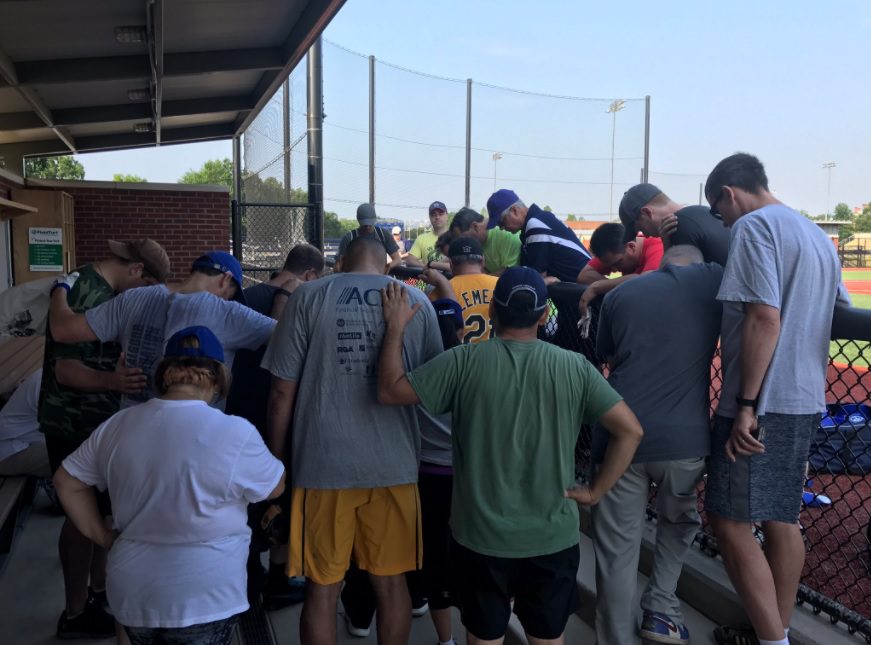 Scalise, a Catholic, was shot at the hip and was transported to surgery. He is reportedly in stable condition.

“Prior to entering surgery, the Whip was in good spirits and spoke to his wife by phone,” Scalise’s office said in a statement. “He is grateful for the brave actions of U.S. Capitol Police, first responders, and colleagues.”

After hearing about the shooting, House Democrats at a separate baseball practice started a spontaneous prayer for the victims.

A total of five people were “medically transported” from the scene, according to authorities.

U.S. Capitol Police shot and apprehended the gunman, who was taken to the hospital. Alexandria Police tweeted that the “suspect is in custody and not a threat.”

Congressman Scalise is a Republican who was elected to represent Louisiana in 2008. Before running for Congress, he had served in the Louisiana state senate for four months and in the Louisiana House of Representatives for 12 years.

He is married to the former Jennifer Letulle and they have an 8 year-old daughter, Madison Carol and an 8 year-old, Harrison Joseph.

Scalise is a life-long Catholic from Louisiana, his home diocese is the Archdiocese of New Orleans, and his church parish is St. Catherine of Siena. Archbishop Gregory Aymond of New Orleans released a short statement, as has the principal of his high school alma mater, Archbishop Rummel High School, where he is very active.

“This morning I am saddened by this act of violence. Our prayers are with Congressman Scalise, for his healing, his wife Jennifer and their children, and for all involved in this shooting incident,” Archbishop Gregory Aymond said in a statement.

“Our hearts and prayers are with him and his family and all who were involved in this tragic incident. The Archbishop Rummel community pledges its prayers and support for the Scalise family as they move forward through recovery,” said Marc Milano, principal of Archbishop Rummel High School.

Two years ago, the Congressman tweeted a photo of his daughter’s first communion.

The United States Conference of Catholic Bishops, which started its Spring General Assembly this morning in Indianapolis, opened their conference with a prayer for the victims of the shooting as well as the victims of a massive apartment fire in London last night. USCCB Vice President Archbishop Jose Gomez gave the prayer, which was also posted to Twitter.

Cardinal Donald Wuerl, Archbishop of Washington, D.C. also tweeted that he was praying for the congressman.

“I am profoundly saddened by the tragic shooting at Eugene Simpson Stadium Park in Alexandria earlier this morning. Today I call on the faithful in the Diocese of Arlington and all people of good will to join me in prayer for Rep. Steve Scalise and the others who were wounded in this senseless attack. May the Lord grant them swift healing and consolation. As we pray for God’s mercy, we also ask Mary, our Mother, to intercede for us, so that our world will know the peace of her Son.”

“Today as the Church invites us to begin a novena to the Sacred Heart of Jesus, I ask Catholics of our diocese to pray the novena with a specific intention for peace,” he concluded.

Roughly 15-25 people were at the practice, including Sens. Rand Paul, R-Ky., and Jeff Flake, R-Ariz. Paul told MSNBC that “it would have been a massacre” if Capitol Police weren’t there.

Update 11:00 am Central: U.S. President Donald Trump has said the suspected gunman — identified by multiple law enforcement officials as James T. Hodgkinson III, 66, from Illinois — was killed in a shootout with police, two of whom were wounded in the gun battle.

Correction 12:13 p.m. Central: A previous version of this article identified Scalise’s parish as St. Agnes and his home diocese as Arlington, Virginia. Steve Scalise’s home diocese is the Archdiocese of New Orleans, and his church parish is St. Catherine of Siena.