Blessed Mother Teresa is known for exemplifying the seven corporal works of mercy in everyday life. Two schools in the Diocese of Orlando have recently been recognized with awards that demonstrate those same works. 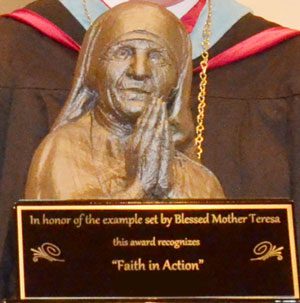 Blessed Mother Teresa is known for exemplifying the seven corporal works of mercy in everyday life. Two schools in the Diocese of Orlando have recently been recognized with awards that demonstrate those same works.

The inaugural Blessed Mother Teresa Award was presented to Trinity Catholic High School in Ocala and Annunciation Catholic Academy in Altamonte Springs in recognition for service projects they completed this school year. The winners were chosen by a panel of judges made up of diocesan and church staff members and those in religious life. All five high schools, as well as 19 elementary schools, submitted applications to be considered for the honors.

The Diocese of Orlando Office of Schools provided each school with a statue of Blessed Mother Teresa, and that statue will travel annually to the winner of the award. Each school also received a plaque that can be displayed permanently in their school building. Each winner received a check for $1,000 to give to a charity of their choice.

Henry Fortier, superintendent of schools for the Diocese of Orlando, said the awards were of “high honor” and should be received with “great pride.”

Trinity Catholic High School freshmen students were honored for their volunteer efforts in the community showing compassion and mercy in the tradition of Blessed Mother Teresa.

One hundred and thirty ninth-grade students decided to spend one day of service on two important projects. Half of the class volunteered at the Memories Of Missing Smiles (M.O.M.S.) Memorial Park in Ocala, which was created to remember children who have died. Jacob Casey, a graduate of Trinity Catholic High School is memorialized there. The park is adorned with trees, plants, flowers and plaques either planted or constructed by family members of the children. The students helped out by cleaning walkways and paths and created a number of new memorial areas, including the installation of a bird bath.

The other project involved the clean-up of a local motel, the Samaritan Inn in Leesburg that provides temporary housing for the homeless.

The students washed windows, made beds, moved furniture and worked hand-in-hand with some of the homeless residents and their children. At the end of the seven-hour service day, the students returned to school and closed the experience with a prayer service.

“We knew from past years that the service day would truly be a remembered event for them,” said Principal Jacquelyn Gehrsitz.

Bishop John Noonan and Henry Fortier, superintendent of schools for the Diocese of Orlando, made the announcement and presentation of the Blessed Mother Teresa Award to Gehrsitz and De La Salle Brother Daniel Aubin, Trinity Catholic president, at the school’s baccalaureate Mass for graduating seniors May 23 at Blessed Trinity Catholic Church in Ocala.

“I’m very, very surprised, because I know that every school in the Diocese does wonderful things,” Gehrsitz said after receiving the award. “It’s nice to be recognized.”

Trinity Catholic High School requires each of its students to complete 25 hours of community service each academic year, and the service is a means to form young men and women of integrity and purposeful living. Many of the students go above and beyond those required hours, some even participating in mission trips, Gehrsitz said. Their efforts during Catholic Schools Week were part of the “Servant Project,” the school’s Christian Service Learning program.

“I was very happy that this class received the award,” said Brother Damian Ryan, director of mission effectiveness and campus ministry, who supervised the students’ participation at the motel. “I was just amazed by the amount of work that the kids were able to do in one day.”

Gehrsitz said she was initially surprised by the award, but became joyous in receiving an honor that focused on Blessed Mother Teresa’s call to address corporal works of mercy.

“Both projects addressed the corporal works of mercy in different ways in that they touch the lives of those who are missing smiles through death or homelessness,” Gehrsitz said. “Our students gained compassion for the bereaved and homeless through their service to these groups. Our students, as you can see, bring the face of Christ to others as they work together as one body.

“This is a great thing for the freshman class,” she added.

Annunciation Children Reach Out to Children in Dominican Republic

They turned out in droves, bicycles of all colors, shapes and sizes.

Annunciation Catholic Academy in Altamonte Springs students came up with an idea two years ago to collect donated bicycles for students in the Dominican Republic who were limited to one bicycle per village. The Annunciation students were already collecting money and school supplies for the Diocese of San Juan de la Maguana, which is the Diocese of Orlando’s sister diocese. But the students wanted to do even more!

“I would come back from a mission trip and tell them things,” said Dr. Margaret Curran, principal of Annunciation Catholic Academy. “I told them about the town that had the one bicycle, and that prompted them to bring in bicycles. The next thing we knew, our courtyard was filled with bicycles, so the children wouldn’t have to take turns with their bikes.

“Sometimes, I had ideas, like bringing in school supplies, but what hit their heart was something different,” Dr. Curran continued. “We changed what we were going to do. The kids have become very involved in wanting to help out.”

That effort, along with the donation of more than $30,000 over a three-year period, led Diocese of Orlando staff members to present the Blessed Mother Teresa Award for elementary schools to Annunciation. The presentation was made at the school May 30, by Bishop Noonan; Fortier, superintendent of schools; and Ursuline Sister Bernadette MacKay, director of the mission office.

Dr. Curran and Father Stephen Parkes, pastor at Annunciation accepted the award on behalf of all the students who made this project possible. Sister MacKay also presented the school a special certificate that had a photo of the bicycles used in the Dominican Republic.

In addition to the bicycles, school supplies and money, students have also donated their old uniforms, rain ponchos, boots and shoes to students in the Diocese of San Juan de la Maguana.

“This is outstanding recognition of all of the children have done over many years to reach out to other children and help them in various ways,” Dr. Curran said. “Students at Annunciation have seen and understood that they have an obligation, a Gospel mandate, to help those less fortunate than themselves.”

It seemed fitting that Annunciation Catholic Academy received the award during a leadership committee meeting between the school’s staff, faculty and students. The students were in the process of learning what it takes to become a good leader, but their efforts in helping others, in ways exemplified by Blessed Mother Teresa, already showed they have leadership qualities and abilities, Dr. Curran said.

“We were reminding the students that they are called to be leaders,” Dr. Curran said. “We want them to know that they are Catholic leaders, and that they need to keep this in mind when they are doing things for themselves and for others. They are the leaders of our Church.”

Genia Sprinkle, a seventh grader, saw firsthand the poverty young children experience in the Dominican Republic when she went on a trip with her mother. She said that makes it even more special, knowing that her school received the award out of more than 20 nominations.

“We tried to follow Mother Teresa’s works, such as participating in a number of food and clothing drives,” Genia said. “I am extremely happy for Dr. Curran and our school.”